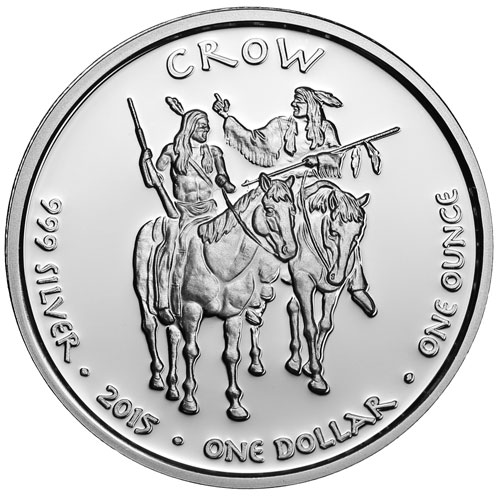 The third release in the Native Dollars Series from the Native American Mint honors the Crow Nation and represents the state of Montana. Like so many Native American tribes in the United States, the Crow represent a state in this series that does not accurately reflect their ancestral heritage. Right now, the 2015 1 oz Silver Proof Montana Crow Timber Wolf Coin is available to purchase on Silver.com.

Crow peoples were originally found in the Ohio Valley near the shores of Lake Erie. As European powers began to increase in number on the North American continent, tribes with closer ties and access to guns and better arms were able to push the Crow from their ancestral home.

Over the course of two centuries, the Crow Nation moved westward. At first they settled near Lake Winnipeg in Manitoba, Canada, but were eventually driven from there by the Cheyenne and then Sioux. Eventually the Crow Nation split, with modern descendants of the tribe eventually coming to call Montana home.

Each of the 2015 1 oz Silver Proof Montana Crow Timber Wolf coins in this listing features a satin finish, which gives it a mirror-like appearance rather than a matte finish. Although the coins have a face value, only the US Mint can issue legal tender values to American coinage.

On the obverse is the image of two Crow warriors atop their horses, with one holding a gun and the other brandishing a spear. Engravings identify the tribal nation, purity, metal content, year of issue, face value, and weight of the coin.

The reverse includes the image of a lone timber wolf as it lays prone, raising its head to let out a haunting howl into the wilderness. Engravings on this face are standard for the series, and include the state and animal, as well as the word “America.”

Please direct questions to Silver.com associates at 888-989-7223, connect with us online using our live chat, or email us.