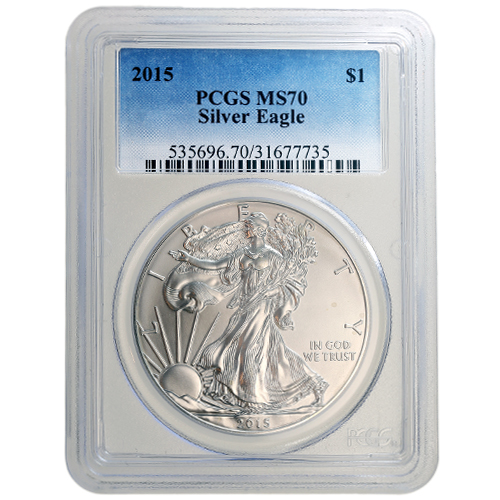 With passage of the Liberty Coin Act in 1986, the United States Mint introduced the first of three official bullion coin programs. The Silver American Eagle is the silver version of the nation’s American Eagle coin program, which includes the gold coin and the platinum variant.

Silver American Eagle coins are available in bullion, proof, and uncirculated versions, but it is the bullion version of the coin that attracts millions of investors annually. In 2015, the United States Mint saw a sixth broken sales record since 2008, and second consecutive. A total of 47.3 million coins were produced and sold in 2015 alone.

On the obverse of the 2015 1 oz Silver American Eagle is the stunning image of Walking Liberty. Her depiction includes a full-figure representation of Liberty as she walks toward the setting sun, holding oak and olive laurels to represent the nation’s civic and military prowess, and wearing the American flag around her shoulders.

The reverse of the Silver American Eagle includes the image of the heraldic eagle of the United States. Featuring an American bald eagle set behind the nation’s heraldic shield, the eagle clutches arrows in one talon and olive branches in the other. This is the creation of John Mercanti, Chief Engraver of the United States Mint from 1986 to 2010, and is a modernized version of a design that originated on American coins in 1794.

The 2015 1 oz Silver American Eagle coins in this product listing have Mint State 70 grades from the PCGS. Coins in this condition exhibit full, original mint luster and feature no detracting flaws of any kind.

If you have questions, please don’t hesitate to reach out to Silver.com. You can contact us on the phone at 888-989-7223, reach out to us online using our live web chat, or via our email address.