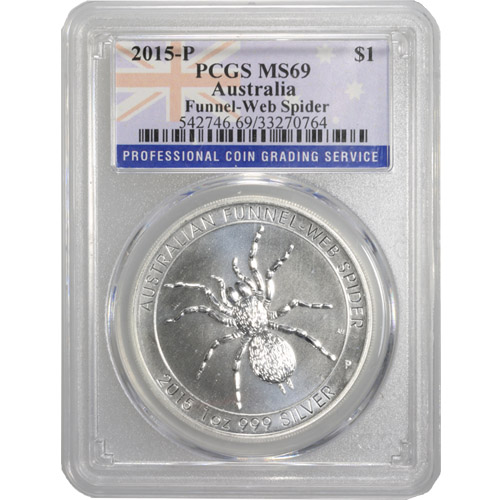 Any quantity available for $24.00 per oz over spot!

The Australian Funnel-Web Spider is a medium- to large-sized spider species common to many of the states in Australia. Though some of the members of this species are dangerous to humans, most are not even if those subspecies have the ability to produce venom. Now, the 2015 1 oz Silver Australian Funnel-Web Spider Coin is available to you in near-perfect condition for purchase online at Silver.com.

The Perth Mint’s Wildlife Series started in 2014. The collection focused primarily on offering investors 1 oz silver bullion coins with images of native Australian wildlife on the reverse. Importantly, this collection did not crossover with the other annual-issue bullion coins in terms of design. The koala, kookaburra, and kangaroo, for example, did not feature in the Wildlife Series.

First up in the Perth Mint Wildlife Series was the saltwater crocodile, one of the largest reptiles in the world and one of Australia’s deadliest predators. Second up in that series, the funnel-web spider. Though the size of the funnel-web spider might make it appear imposing or even dangerous, it does not generally produce a toxic venom. Only one or two subspecies have shown an ability to do so, and even then, modern medicine is able to combat the venom.

The obverse side of 2015 1 oz Silver Australian Funnel-Web Spider Coins bears a portrait of Queen Elizabeth II. Her Majesty is shown in right-profile relief in a design created in 1998 by Ian Rank-Broadley. This bust of the Queen shows her wearing the Girls of Great Britain and Ireland Tiara, one of her favored pieces of jewelry. It was passed down to her from her grandmother, Queen Mary.

On the reverse face of 2015 Silver Australian Funnel-Web Spider Coins is a depiction of the arachnid itself. The funnel-web is distributed throughout the entirety of the east coast of Australia. The only places you will not find the funnel-web spider in Australia are in the state of Western Australia and in the Northern Territory.

These 2015 1 oz Silver Australian Funnel-Web Spider Coins are now available to you in a protective plastic slab courtesy of the PCGS. Each coin has a near-perfect Mint State 69 grade from the grading house. This indicates the presence of full, original mint luster and a maximum of two minor detracting flaws. Those flaws are limited in nature to minuscule contact marks or hairlines outside of the primary focal areas of the coin.

Silver.com customer service is available to assist you on the phone at 888-989-7223. You can also reach out to us through our live chat and email address features.