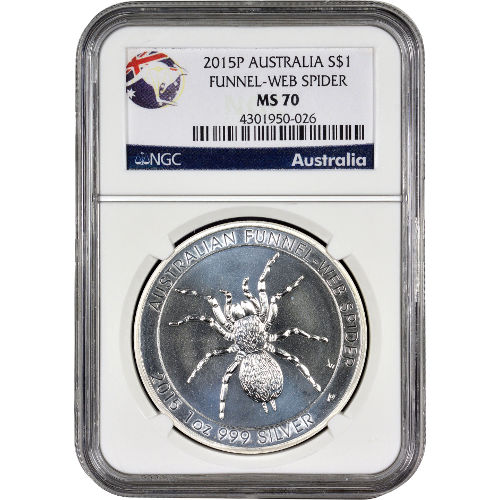 The Funnel-Web Spider coin from the Perth Mint is one of a number of coins from the mint featuring deadly animals found natively on the continent. Part of a subfamily that consists of more than 40 species of spiders, the funnel-web has one of the most toxic venoms of any creature on the planet. Today, Silver.com offers the 2015 1 oz Silver Australian Funnel-Web Spider coin in perfect condition.

Funnel-web spiders come in a variety of sizes, and all 40 subspecies of the spider are native to Australia. Larger spiders in the species are dark in color and have coloring ranging from mixes of black and brown to blue and plum. Each spider has fangs longer than most brown snakes and deliver a toxin that is among the deadliest in the world.

On the reverse face is the image of the funnel-web spider, with engravings around the image identifying the creature, and the coin’s weight, purity, metal content, and year of issue.

The obverse features the right-profile portrait of Queen Elizabeth II. Created in 1998 by Ian Rank-Broadley, this design reflects the fourth-generation depiction of Her Majesty since she ascended to the crown in 1952.

Australia’s oldest operating mint is the Perth Mint in Western Australia. Once part of the British Royal Mint system in the country, and under British control until 1970, today it is state-owned by the local government. Though not associated with the Royal Australian Mint, Perth Mint coins are legal tender under the Currency Act of 1965.

If you have questions, please call Silver.com at 888-989-7223. You can also connect with us online using our live chat feature or email us.