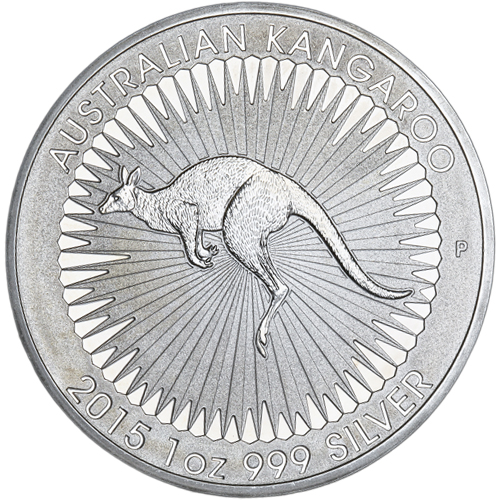 The nation of Australia is home to some of the most unique, endemic species of animals in the world. Koalas, wallabies, wallaroos, and the kangaroo are among a handful of species found only in the Land Down Under, and the kangaroo is arguably one of the two most recognizable species from the continent. Today, the kangaroo comes to life on the 2015 1 oz Silver Australian Kangaroo Coin, available on Silver.com with a BU grade.

Each of these 2015 1 oz Silver Australian Kangaroo Coins are Brilliant Uncirculated specimens. Coins with a BU grade feature no signs of wear and tear, though you will note the presence of minor flaws such as breaks in the luster, spotted surfaces, or contact marks from the striking process.

On the reverse of these Silver Australian Kangaroo coins is the image of a kangaroo as it bounds along the Australian landscape. These beautifully designed coins include intricate background details, such as an outsized moon rising into the sky above and a river in the foreground that twists off into the background toward a wooded area.

The obverse of the 2015 1 oz Silver Australian Kangaroo Coins includes the right-profile portrait of Queen Elizabeth II. Her Majesty’s effigy was created in 1998 by Ian Rank-Broadley, the fourth artist to create an updated version of the Queen to appear on commonwealth coinage during her 64-year reign as Queen of England

If you have questions, please don’t hesitate to ask Silver.com customer service. You can reach us on the phone at 888-989-7223, online using our live web chat, and via our email address. Check out our full selection of Perth Mint Silver Coins.