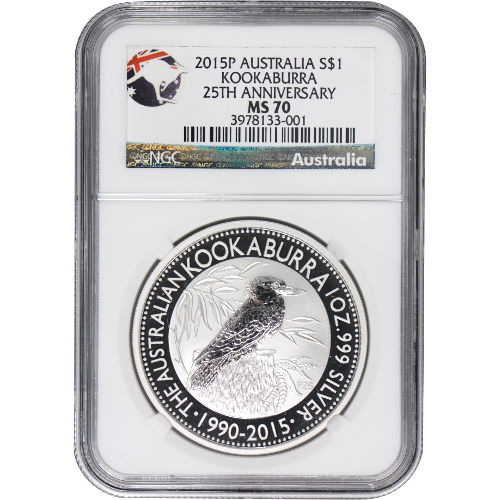 In 2015, the most popular silver bullion product from the Perth Mint celebrated 25 years of production when the 2015 Silver Australian Kookaburra was introduced. The first bullion coin from the Perth Mint to feature native species to the continent, the coin sparked a craze that continues today with other wildlife-themed Australian coins. Silver.com is currently offering the 2015 1 oz Silver Australian Kookaburra coin in perfect condition.

Silver Australian Kookaburra coins feature new design on the reverse side each year. The coin program launched in 1990, and has featured a new reverse design every year since then without fail. While the specific design differs annually, the motif remains focused on the bird in its native habitat.

Each of the 2015 1 oz Silver Australian Kookaburra coins in this Silver.com listing has a perfect MS70 grade from the NGC. Coins in this condition have their full, original mint luster with no detracting flaws.

On the reverse is the latest design for the Silver Australian Kookaburra. A lone bird is featured on a tree stump, with engravings around the outside identifying the coin program, as well as the coin’s weight and purity. A special engraving along the bottom identifies the 25th anniversary of the series with the inscription “1990-2015.”

The obverse features Ian Rank-Broadley’s right-profile portrait of Queen Elizabeth II. Her Majesty’s effigy has featured on the obverse of Commonwealth coins since she took the throne in the 1950s. Over the course of six decades of rule, her image has been updated five times, with Rank-Broadley’s design created in 1998 as the fourth-generation design.

The Perth Mint is Australia’s oldest operating facility. It is not affiliated with the federal government’s Royal Australian Mint, but the Currency Act of 1965 bestows legal-tender status on its coins.

Please direct all your questions to a Silver.com associate at 888-989-7223. You can also reach out online using our live chat and email features.