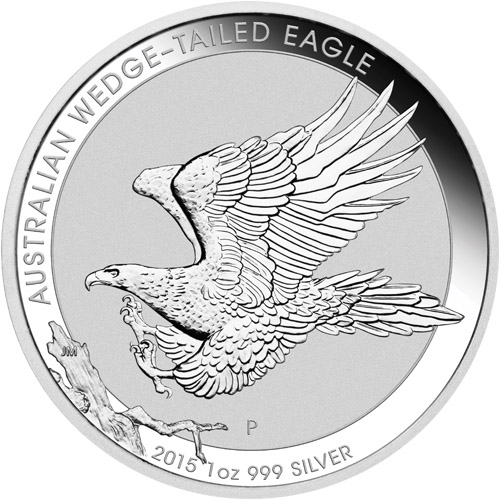 The first issue of an Australian Wedge-Tailed Eagle coin came from the Perth Mint in 2014, and it was an immediate hit with the numismatics community. It was followed in 2015 by another series devoted to this iconic bird as realized in the dynamic artwork of U.S. Mint chief engraver John Mercanti, whose participation in these coins series represented the first collaboration between the U.S. and Pert Mints. The 2015 1 oz Silver Australian Wedge Tail Eagle Coin remains a persistently popular collectible.

The 2015 Silver Australian Wedge Tail Eagle Coin features high-relief artwork by a master engraver and ships in a secure plastic flip. Containing a full ounce of pure silver and showcasing impeccable design and expert striking by the Perth Mint, each item ships fully insured by Silver.com against even the most remote possibility of damage or loss en route. These precious collectibles are in demand from avid collectors and discerning investors to this day.

The coin presents a singular collaboration between John Mercanti, the twelfth chief engraver of the U.S. Mint, and Australia’s Perth Mint: the Wedge-Tailed Eagle coins being the first time that a U.S. Mint engraver contributed artwork for a piece being struck in another country. The sleek and iconic profile of the featured bird of prey represents a celebration of wildlife that has enjoyed long–term popularity among both coin and wildlife enthusiasts.

The obverse side of the coin is dominated by an official effigy of Queen Elizabeth II that identifies it as legal tender of Australia. It’s accompanied by the inscriptions “Elizabeth II,” “Australia,” and “1 Dollar.”

John Mercanti’s high-relief portrait of a Wedge-Tailed Eagle in flight, as if captured in the act of hunting, features on the coin’s reverse. It’s joined by the inscription “Australian Wedge-Tailed Eagle” at the rim, along with a verification of the coin’s weight and silver contents.

You can learn more about this 1 oz silver coin or any of Silver.com’s offerings by contacting our customer service department. You can reach us by phone at 888-989-7223, touch base through our online live chat, or send inquiries directly to our e-mail.