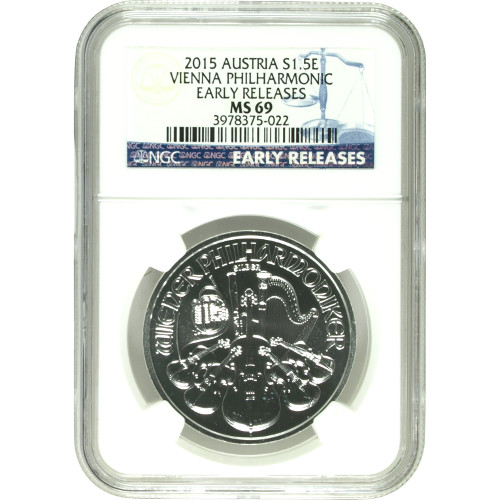 The Vienna Philharmonic orchestra is not only an Austrian national treasure, but it is a cultural treasure that belongs to the world. Originally formed in 1842, the orchestra is one of the oldest and most respected musical performance groups in the world. The Austrian Mint pays homage to the Vienna Philharmonic through depictions of the orchestra on the 2015 1 oz Silver Austrian Philharmonic coin. Today, you can purchase this coin from Silver.com with an MS69 grade from the Numismatic Guaranty Corporation as part of the Early Release series. Coins in the Early Release series arrive from the mint within the first 30 days of their release. An MS69 grade from the NGC indicates these coins have an attractive, sharp strike and no more than two blemishes.

On the obverse side of the 2015 1 oz Silver Austrian Philharmonic is a depiction of the pipe organ found inside the Musikverein in Vienna. Engravings on this side are in German and read “Republik Osterreich.” The weight, purity, year of minting, and face value (in Euros) of the coin are also listed here.

The reverse side of the coin features various instruments used by members of the orchestra. Included in the image are a bassoon, harp, Vienna horn, four violins, and a cello. Engravings, also in German, read “Wiener Philharmoniker” and “Silber.” Thomas Pesendorfer, the Austrian Mint’s chief engraver, designed the images used on both sides of the coin.

Today, the Austrian Mint is a subsidiary of the National Bank of Austria and is responsible for the production of all Austrian currency, as well as the currency of numerous other European nations. The mint was originally founded by Duke Leopold VI in 1194 using 15 tonnes of silver paid to him as ransom.

Silver.com is dedicated to customer satisfaction. If you have questions about the Early Release 2015 1 oz Silver Austrian Philharmonic Coins NGC MS69, or any other Silver.com product, please call our associates at 888-989-7223. You can also connect with us online through our live chat service.