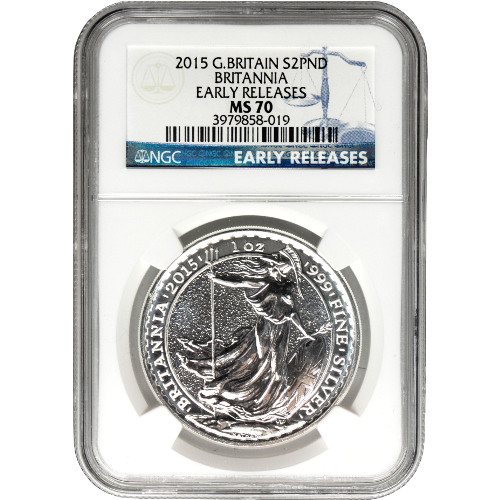 Britons have trusted the English Channel to separate their homeland from the turmoil of mainland Europe for centuries. One of the enduring symbols of the Channel’s power to protect England is that of Britannia. The image of Britannia, a personification of the island and a guardian of its sovereignty, once appeared on all modern British coins. Today, you can purchase a 2015 1 oz Silver British Britannia Coin from Silver.com with an MS70 grade from the Numismatic Guaranty Corporation. These coins are part of the Early Release series, indicating they arrived from the Royal Mint within the first 30 days of their release.

Britannia is an ancient term used to identify Roman Britain after it was conquered by the empire. Over time, Britannia became a female personification of the island itself. In 1707, Britannia became the official emblem of the British Empire, and served as a symbol of power and unity. The Silver British Britannia coin was first introduced in 1997 and has featured alternating depictions of Britannia during its minting.

On the reverse of the 2015 1 oz Silver British Britannia Coin is the image of Britannia. She stands guard over the waters of the English Channel, with a trident in her right hand and a shield in her left. The shield bears the image of the Union Jack, while a Corinthian helmet rests atop her head. Engravings surrounding her image include “Britannia,” the year of minting, weight, purity, and metal content of the coin. Robert Hunt designed the latest image of Britannia on the silver coins in 2013.

The Royal Mint began operation in 886 as the London Mint during the reign of Alfred the Great. Now known as the Royal Mint, it serves as the primary body permitted to mint coins for the United Kingdom. An MS70 grade from the NGC indicates this coin has a perfect strike and carries no blemishes.

If you have any questions about this coin or other Silver.com products, don’t hesitate to contact our associates at 888-989-7223. You can also reach us online using our live web chat. Make sure you look over our full collection of British Silver Coins to view other series from the Royal Mint.