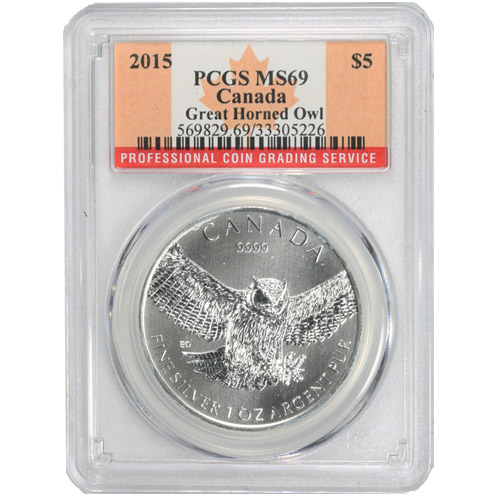 Any quantity available for $34.60 per oz over spot!

The silver coins for sale in the Birds of Prey Series from the Royal Canadian Mint debuted in 2014. The series was the follow-up release to the popular Canadian Wildlife Series issued from 2011 to 2013 with six designs in total. The coins in this series proved so popular that a second Birds of Prey Series was eventually issued as well. Today, 2015 1 oz Silver Canadian Great Horned Owls are available in near-perfect condition online at Silver.com.

The Birds of Prey was a four-coin release that issued two coins per date mark in the series across 2014 and 2015. The coins were released with the Peregrine Falcon first, followed by the Bald Eagle, Red-Tailed Hawk, and these Great Horned Owls. Each one of the designs in the series was created by Emily Damstra, the same artist who contributed the final two designs of the Canadian Wildlife Series.

All of the 2015 1 oz Silver Canadian Great Horned Owls in this product listing are available with near-perfect certifications from the PCGS. A Mint State 69 coin has full, original mint luster with no more than two minor detracting flaws present. Examples of acceptable flaws include only minuscule contact marks and hairlines located outside of the primary focal points of the coin’s surface area.

Queen Elizabeth II is featured on the obverse of the 2015 1 oz Silver Canadian Great Horned Owls. This design was created in 2003 by Susanna Blunt as the fourth-generation effigy of the Queen for Canadian coinage. This is just the second design of the monarch on Canadian coins to come from a Canadian artist and depicts the Queen in right-profile relief with no crown on, a first in monarch portraits since the reign of King George VI.

A Great Horned Owl is shown on the reverse of these 2015 Silver Canadian Great Horned Owls. The design was created by Damstra to depict the bird as it descends on its prey from high above. The birds wings are flexed out to its sides as it swoops in with its talons reaching out to snatch up its prey in a lightning attack.

Please contact Silver.com if you have any questions about these coins. Our customer service team is available at 888-989-7223, online using our live chat, or via our email address.