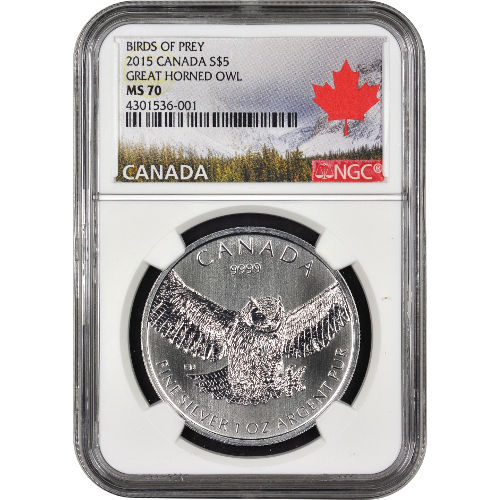 The fourth and final coin in the Birds of Prey series from the Royal Canadian Mint solidified the program’s place in the popular history of RCM products. Featuring two releases each year in 2014 and 2015, the Birds of Prey coins had limited mintages of one million each design, and were coveted for their designs and purity. Now, Silver.com has the 2015 1 oz Silver Canadian Great Horned Owl Coin in perfect condition.

Birds of Prey coins were introduced in 2014 by the Royal Canadian Mint as the popular successor to the Canadian Wildlife Series. Both programs featured native species found in Canada, and in North America at large. The Birds of Prey Series featured two releases each year, one in February and one in August.

These Great Horned Owl coins wrapped up the program by featuring the most popular aerial predator in Canada. Emily Damstra, who contributed the final two designs to the Canadian Wildlife Series, created all four designs in the Birds of Prey Series.

Each 2015 1 oz Silver Canadian Great Horned Owl has a Mint State 70 grade from the NGC. These perfect specimens feature their full, original mint luster and bear no detracting flaws of any kind on the surface.

The reverse face of each coin bears Damstra’s depiction of a Great Horned Owl in flight. The bird can be seen descending quietly onto its prey, its wings outstretched and its claws ready to snatch up its target.

On the obverse of the coin is the right-profile portrait of Queen Elizabeth II created by Susanna Blunt in 2003. Her Majesty’s image is featured on the obverse of all Canadian coinage, and is accompanied by inscriptions denoting the year of issue and the face value of the coin.

If you have questions, Silver.com associates have answers. Feel free to call us at 888-989-7223, chat with us live online, or send us an email.