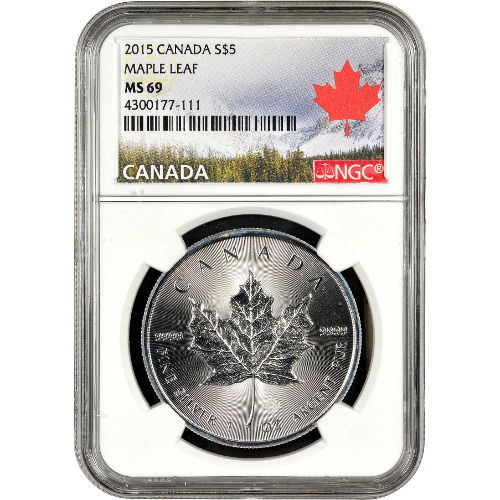 Silver Canadian Maple Leaf coins are part of the larger Canadian Maple Leaf bullion program from the Royal Canadian Mint. The gold version of the coin was just the second-ever bullion coin introduced in the world, and designed to substitute for the loss of the Krugerrand in global markets following an economic boycott of South Africa’s apartheid policies.

Silver versions of the coin appeared for the first time in 1988, and have been struck in all subsequent years as the nation’s official silver bullion product. Each of the 2015 1 oz Silver Canadian Maple Leafs in this listing are in near-perfect condition. MS69 coins are identified by their full, original mint luster and a maximum of two minor detracting flaws.

On the reverse of all Silver Canadian Maple Leaf coins is the image of a sugar maple leaf in the center, accompanied by engravings that read “Canada,” “9999,” “Fine Silver 1 oz Argent Pur.” For 2015, new micro-laser engraved radial lines and a privy maple leaf with year of issue inside have been added as security measures in the design.

The obverse bears Susanna Blunt’s 2003 depiction of Queen Elizabeth II. England’s longest reigning monarch, Her Majesty is featured in right-profile relief with her name, year of issue, and face value accompanying on the obverse.

The Royal Canadian Mint was founded in 1908 by the ruling British, and expanded in the 1980s to include a secondary facility in Winnipeg to boost production capacity for the mint system.

If you have questions, Silver.com associates have answers. Please feel free to contact us at 888-989-7223, chat with us live online, or submit an email.