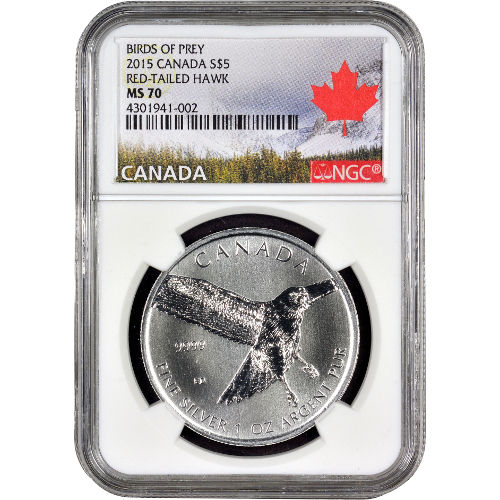 The world is full of fearsome aerial predators. Birds such as the eagle, hawk, and owl dominate the skies over Canada, and now they dominate the face of one of the newest and most popular wildlife-themed coin programs from the Royal Canadian Mint. Right now, Silver.com has the 2015 1 oz Silver Canadian Red-Tailed Hawk available in perfect condition.

Each 2015 Silver Canadian Red-Tailed Hawk coin available right now on Silver.com is a perfect specimen from the NGC. Coins with an MS70 certification have shown their full, original mint luster and bear no detracting flaws on any of the surfaces.

Birds of Prey coins were released in pairs throughout 2014 and 2015. The series started with the February 2014 release of the Peregrine Falcon coin, which was followed in August of that year by the Canadian eagle. This Silver Canadian Red-Tailed Hawk coin was the first release of 2015 (February), and the program concluded with the Horned Owl in August 2015.

On the coin’s reverse face is the image of a red-tailed hawk as it swoops down to collect its prey. The obverse face of the coin features the familiar right-profile portrait of Queen Elizabeth II, which was designed in 2003 by Susanna Blunt.

The Royal Canadian Mint quickly became one of the finest facilities in the world following its formation in 1908. Today, it operates from two facilities, with its headquarters in Ottawa and a secondary facility in Winnipeg.

If you have questions, don’t hesitate to ask. Silver.com associates are available at 888-989-7223, online using our live chat, and via email.