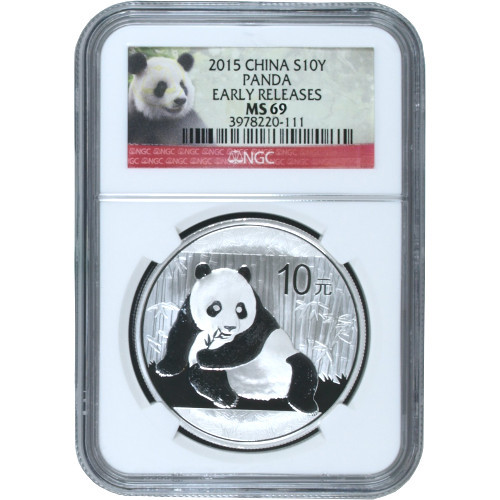 No symbol is more commonly associated with the People’s Republic of China than the panda. These gentle giants remained unseen by many in the Western world prior to the 20th century. Today, the image immediately calls to mind the nation of China and its appearance on the nation’s official silver bullion coin pays homage to the animal’s native homeland. Now, you can buy a 2015 1 oz Silver Chinese Panda Coin from Silver.com with an MS69 grade from the NGC. These coins are available as part of the Early Release series, indicating they were received by the NGC within the first 30 days of their release.

The Silver Chinese Panda coin program was launched in 1983, but did not gain regular minting status until 1987. Proof-quality coins were minted in 1983, 1984, and 1985, with no coins struck in 1986. Unlike other national silver bullion programs, such as the Silver Canadian Maple Leaf and American Silver Eagle, the design on the 2015 1 oz Silver Chinese Panda Coin is different from prior years. In fact, the imagery changes from year to year on these coins. Only the 2001 and 2002 coins bear the same panda imagery.

On the obverse side of the 2015 1 oz Silver Chinese Panda coin is a depiction of the Temple of Heaven. In Chinese characters above the Temple’s image is the engraving “People’s Republic of China,” with the year of minting engraved below. The reverse side of the coin shows the latest image of the panda. In it, a lone panda is seen sitting and chewing on some leaves. Behind it is a wall of bamboo. Only the face value, in Yuan, is engraved on this side of the coin.

The 2015 1 oz Silver Chinese Panda is guaranteed by the People’s Bank of China and is minted at various facilities throughout the country. Although no mint marks are ever included on the coins, it is believed that most coins are produced at facilities in Shenzhen, Shanghai, and Shenyang. The Numismatic Guaranty Corporation has given these coins an MS69 grade, which means they have an attractive strike with two or fewer blemishes.

If you have any questions about these coins, the online purchasing process, or anything else before you place your order, we encourage you to reach out to our associates at 888-989-7223. You can also get in touch by using the live web chat located on our contact page.