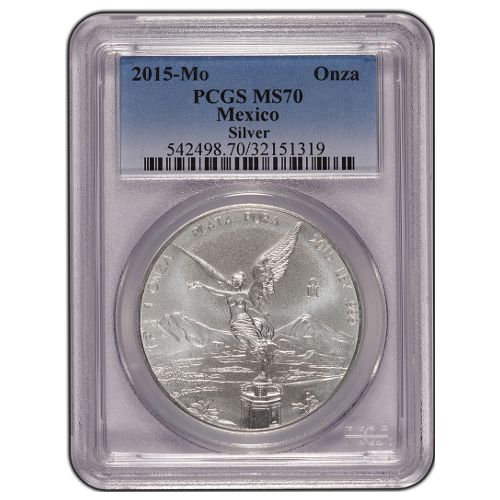 When Mexico began the celebration of the centennial of its War of Independence, the nation looked back in history for iconic images that inspired Mexicans in their hunt for freedom. In the center of Mexico City, the statue of Winged Victory was erected in memory of the start of the war against Spain.

This image and others from ancient Aztec culture were used on the obverse side of the 2015 1 oz Silver Mexican Libertad. In the middle of the obverse is the image of Winged Victory. Behind her, the twin volcanic peaks of Popocatepetl and Iztaccihuatl are visible rising toward the horizon.

On the reverse side of the coin is the Mexican coat of arms. The modern coat of arms is included in the middle, with a bald eagle perched atop a cactus branch as it battles a serpent. The depiction is surrounded immediately by a wreath on the bottom and the phrase “Estados Unidos Mexicanos” above. Around the far outer edge of the coin are 10 historical versions of the coat of arms of Mexico.

Each coin in this listing is in perfect MS70 condition according to the PCGS. Coins in this condition have their full, brilliant luster, and no blemishes, contact marks, or detracting flaws of any kind.

If you have questions about these coins, don’t hesitate to contact a Silver.com associate at 888-989-7223. We’re also available online through our live chat and email services. If you are looking for similar products, please check out the Silver Mexican Libertad Coins page of Silver.com.