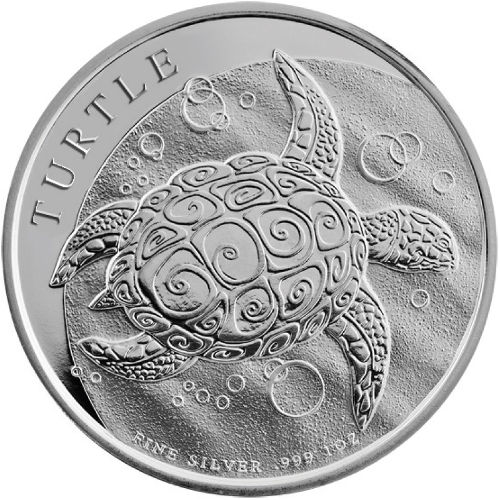 The Pacific Ocean is home to a wide array of stunning wildlife. Unfortunately, many of the region’s wild creatures are in danger of extinction. Among those classified as critically endangered is the hawksbill turtle. The New Zealand Mint celebrates the hawksbill and calls attention to its plight on the 2015 1 oz Silver New Zealand Niue Hawksbill Turtle coin. Today, you can purchase this coin from Silver.com in brilliant uncirculated condition.

Hawksbill turtles are classified as critically endangered by the World Conservation Union. Human activity led the hawksbill to the brink of extinction, and it is up to mankind to undue that damage. The hawksbill is noted for its bright, colorful shell designs. This stunning natural characteristic led to mankind hunting the animals to near extinction. Hawksbill turtles live primarily within coral environments, feasting on sea sponges as a primary source of nutrition.

The hawksbill turtle was formerly featured on the Fiji Taku bullion coin, but that program was halted in 2013. The New Zealand Mint gave new life to the hawksbill in 2014 on the 1 oz Niue Hawksbill Turtle coin.

On the reverse side of the 2015 1 oz Silver New Zealand Niue Hawksbill Turtle coin is the image of a lone turtle swimming freely in the Pacific Ocean. Bubbling water can be seen churning around the turtle, with its intricately designed shell bearing a swirl pattern. An engraving on this side reads “Turtle.”

The obverse side of the coin bears Ian Rank-Broadley’s right-profile portrait of England’s Queen Elizabeth II. Her Majesty’s image is surrounded by engravings that include “Elizabeth II,” “Niue,” the face value, and year of minting of the coin.

The New Zealand Mint is a privately-owned corporation that is headquartered in Auckland, New Zealand. It is the only privately-owned mint in the country and is responsible for the production of circulation and commemorative coins for a number of nations throughout the South Pacific, including Niue.

If you have any questions about this 2015 1 oz Silver New Zealand Hawksbill Turtle Coin, other Silver.com products, or the online purchasing process, simply call one of our associates at 888-989-7223. We are also available online through our live chat system.