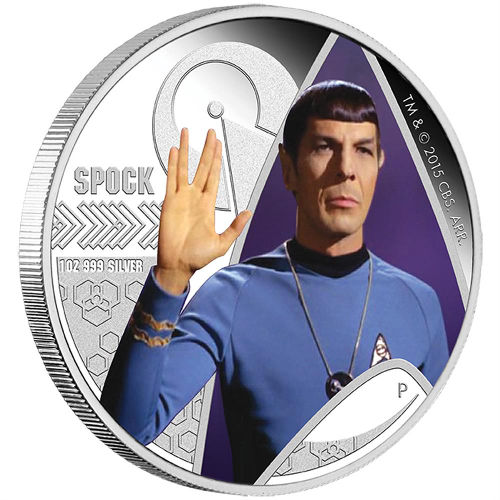 The Perth Mint of Australia celebrates the 60th anniversary of Star Trek with a series of silver proof coins commemorating characters and starships from the popular television and feature film sci-fi series. The first coins released in the series honored captains and their respective starships, and now another major character is honored. The 2015 1 oz Silver Star Trek Spock Proof Coin is available for collectors on Silver.com.

Now the series circles back around to The Original Series, and honors a man known by many as Mr. Spock. Played by actor Leonard Nimoy in the series and early feature films, Spock was the right-hand man to Captain Kirk and served as an ambassador between humans and various alien species.

On the reverse side of the coin is the image of Leonard Nimoy in character as Spock. He is featured in uniform in full color, while the background is a brilliant proof silver with the coin’s weight and purity engraved.

The obverse side of the 2015 1 oz Silver Star Trek Spock Proof Coin bears Queen Elizabeth II’s right-profile portrait. Her image is surrounded by engravings that include “Queen Elizabeth II” and “1 Dollar Tuvalu 2015.”

Australia’s Perth Mint is the nation’s oldest operating facility, but is not affiliated with the Royal Australian Mint. Control of the mint was handed to the state government of Western Australia in the 1970s.

If you have questions for a Silver.com associate, there are many ways to reach us. You can call one of our team members at 888-989-7223, connect with us online using our live web chat, or send your questions to us in an email. If you are looking for similar products, be sure to check out our full collection of Perth Mint products.