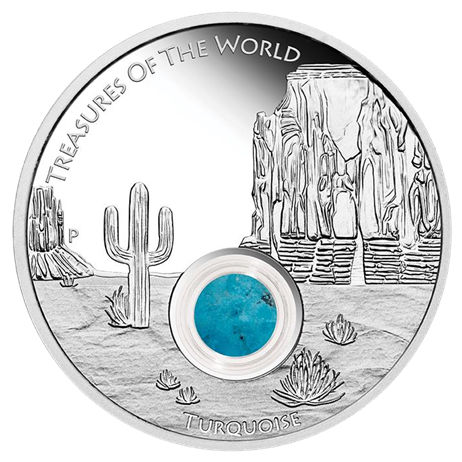 The Perth Mint in Australia is famous for its commemorative coins honoring both national artifacts and those with global significance. The Treasures of the World series calls attention to beloved gemstones from around the world, with the latest coins focusing on North America. The all-new 2015 1 oz Silver Treasures of the World North America Locket is now available for a limited time on Silver.com.

Turquoise has been a favorite gemstone of human civilization in both jewelry and mosaic art pieces. Cultures from the Aztec Empire of Central America to the Ancient Egyptians used turquoise in a variety of ways. North America, specifically the American Southwest, is home to some of the largest turquoise deposits in the world.

The Treasures of the World Series, a five-coin series from the Perth Mint, honors gemstones from various regions of the globe. Previous coins in this series included a Europe coin in 2013 and an Australia coin in 2014, representing garnet and gold, respectively.

On the reverse side of the 2015 1 oz Silver Treasures of the World North America coin is a transparent locket featuring turquoise. Set in the lower-middle area of the coin, a typical southwestern landscape is visible in the background. The engravings “Treasures of the World” and “Turquoise” are featured on this side, along with a “P” mint mark.

The obverse side of the coin features the same locket in the same position as the reverse. Queen Elizabeth II’s right-profile portrait is centered along the top of the coin, with “Elizabeth II” engraved on one side and “Australia” on the other.

The Perth Mint has placed strict maximum mintage caps on these coins. While exact numbers haven’t been released, both the 2013 and 2014 coins were capped at 7,500. Supplies won’t last long, so don’t delay!

If you have any questions, a Silver.com associate will be happy to help. You can reach us on the phone at 888-989-7223, connect with us online through our live web chat, or send us your questions in an email. If you are interested in similar products, be sure to check out our Australian Silver Kookaburras page.