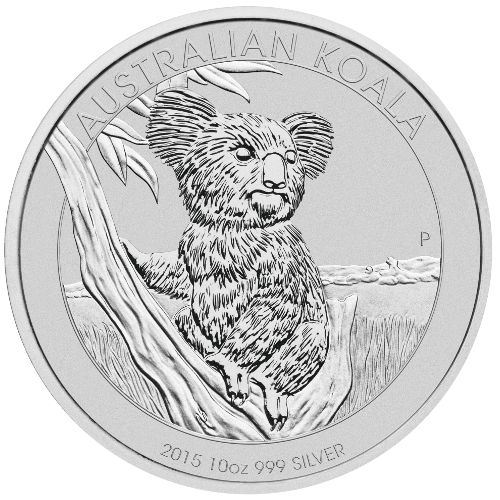 When most people think of Australia, they conjure up images of alligators, kangaroos, and the infamous Outback. One of the most popular residents on the Australian continent is the beloved koala. For 2015, the Perth Mint has released a brand new set of silver coins for investment and commemorative purposes, including a brand new koala design on the 2015 10 oz Silver Australian Koala coin.

The first Australian silver bullion coin was introduced by the Perth Mint in 1990. Beginning in 2007, the Perth Mint added to its bullion offering with the introduction of new silver koala coins. The image featured on the koala coins has changed each year, and for the 2015 10 oz Silver Australian Koala a lone creature was selected for the design.

In the coin, a single koala is seen perched in a tree. The intricate details show the creature sitting in the tree, its long coat perfectly detailed, and its gaze fixed in the distance. Above its head is the engraving “Australian Koala,” while the mint year, weight, and purity of the metal are engraved below. In the immediate background, the grassy open prairie eventually gives way to a mountainous terrain featured in the distance.

The Perth Mint was the third and final facility opened in the Australia by the Royal London Mint to accommodate the processing and refinement of gold and other precious metals on the continent. While the Sydney and Melbourne mints have both closed, the Perth Mint remains in operation today as the primary facility producing commemorative and circulation coins for the Government of Australia.

At Silver.com our number one priority is to provide you with top notch products and customer service. Should you have any questions or would like to get in touch with us, please give us a call at 888-989-7223. We can also be reached directly online through live chat or email. We look forward to assisting you and answering any questions you may have.