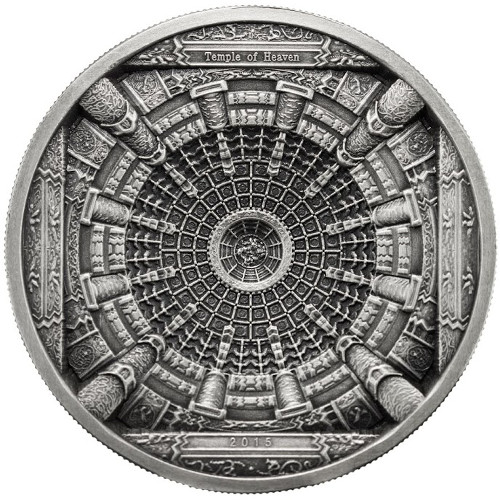 2015 100 Gram Cook Islands Temple of Heaven Silver Coins feature a one-of-a-kind depiction of China’s Temple of Heaven. This Cook Islands coin depicts the Caisson ceiling from inside the temple, as if you were standing inside looking up at the ceiling. The spider web design is an architectural centerpiece in East Asian ceilings, and is commonly found inside temples and palaces.

The New Zealand Mint created the convex design on the reverse side using a new four-layer minting technique. The process creates a deep, 3D appearance for the temple’s ceiling using four layers of design elements. Though it appears much deeper, the image of the Temple of Heaven ceiling is only 5 mm deep.

The obverse side bears the standard image of Queen Elizabeth II. Featured in a right-profile portrait, as designed by Ian Rank-Broadley, Her Majesty is surrounded by the engravings “Elizabeth II,” “Cook Islands,” and the face value of the coin.

The New Zealand Mint is a private mint located in the city of Auckland. In addition to producing numerous commemorative coin series, it also strikes circulation and commemorative coins for smaller Pacific nations nearby, including the Cook Islands. Only 999 of these coins will be struck, so it is important to act fast to capture one of these rare silver bullion products.

If you have any questions about this coin, a Silver.com associate will be happy to answer them. Contact our associates at 888-989-7223, or online using live web chat and email.