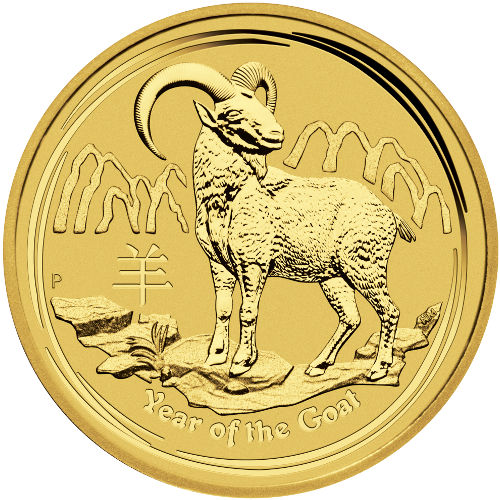 The Lunar Year of the Horse is coming to an end, and the Perth Mint of Australia is welcoming the next animal in the Chinese Zodiac with the new Year of the Goat coin. Minted as part of the Lunar Series 2, the Perth Mint has created the 2015 2 oz Gold Australian Goat coin. Unlike the Silver Australian Goat coins from the Lunar 2 series, the gold coins have a unique image that will only be featured on the gold coins.

On the coin’s obverse side, Ian Rank-Broadley’s portrait of Her Majesty Queen Elizabeth II is featured. The other distinguishing feature of the 2015 2 oz Gold Australian Goat coin is the Chinese character for the word goat featured in the background of the goat’s image.

The Perth Mint was once part of a three-mint system developed in Australia by the Royal Mint of London when Great Britain controlled the continent. The Perth Mint was the third and final mint opened to process gold from Australia’s gold rush for use as bullion and coinage for the Royal Mint of London. Today the mint still produces a large amount of the country’s circulation currency as well as commemorative and bullion coins for investors and collectors.

Should you need assistance or have any questions, we recommend giving us a call at 1-888-989-7223. Our staff can be reached through live chat and email or you can fill out the online form located on our contact page. Make sure to visit our Australian Lunar Gold Coins page to view more items from this stunning series.