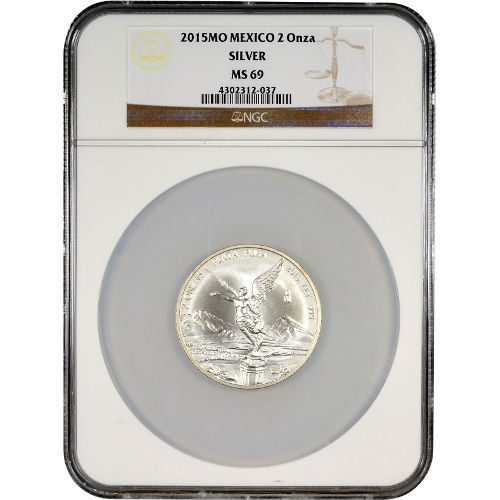 Any quantity available for $24.00 per oz over spot!

One of the most coveted coins available in the precious metals industry right now is the Silver Mexican Libertad. The official silver bullion coin of Mexico, the Libertad is prized for its beautiful design and coveted for its low mintage numbers. Today, the 2015 2 oz Silver Mexican Libertad coin is available on Silver.com in near-perfect condition.

Each of the 2015 Silver Mexican Libertad coins in this product listing from Silver.com has a grade of Mint State 69 from the NGC. Considered a near-perfect specimen, you’ll notice the full, original mint luster on these coins. However, each may have a maximum of two minor detracting flaws on its surface.

Silver Mexican Libertad coins are produced on a yearly basis by the Mexican Mint in bullion, proof, and proof-like versions. The bullion program is the longest-running and most diverse in the series, debuting in 1982 and consisting of seven available weights as of 1996.

On the obverse face of the coin is the image of Winged Victory. When the Spanish colony of Mexico fought for its independence, the Angel of Independence was believed to be watching over the Mexican people in their cause. Her likeness was used then, and stands today on the Victory Column in the center of Mexico City.

The reverse of each Silver Mexican Libertad coin features the coat of arms for the nation. In the center of the design is the modern depiction of the nation’s seal, while 10 historic versions used since independence in 1828 are featured in a circle surrounding it.

The Mexican Mint is the oldest operating facility in the Western Hemisphere. Founded in 1535 by Spanish conquistadors, the mint is owned today by the federal government and operated by Banco de Mexico.

If you have any questions, please don’t hesitate to contact Silver.com at 888-989-7223. You can also reach out to us online using our website’s hosted live chat service, or by sending your questions to us in writing via email.