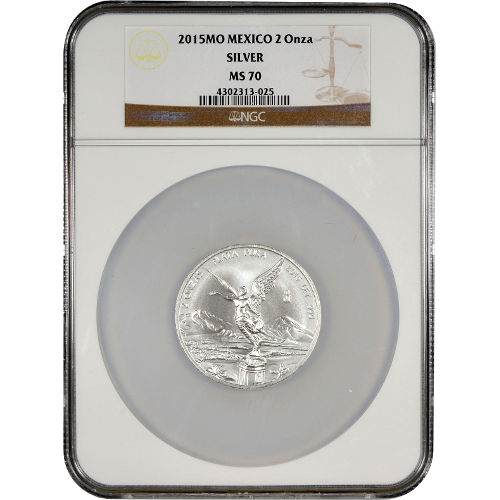 The official silver bullion product of Mexico, the Silver Libertad was first introduced by the Mexican Mint in 1982. Today it is one of the most coveted coins in the world, due in large part to its low mintage levels. Right now, the 2015 2 oz Silver Mexican Libertad Coin is available on Silver.com in perfect condition.

Silver Mexican Libertad coins were inspired by the design of the gold Centenario. The latter was released by the Mexican Mint in 1920 as part of the nation’s centennial celebration of its independence from Spain.

While the Centenario had a face value of 50 Pesos, the Silver Mexican Libertad is unique in that it is a bullion coin and legal tender, but it bears no set face value. In order for individuals to use the coin to settle debts, one would have to contact Banco de Mexico to find out the floating face value of the coin at present.

Each 2015 2 oz Silver Mexican Libertad coin available through Silver.com right now is a perfect specimen. According to the NGC, these MS70 coins have their full, original mint luster and no detracting flaws of any kind.

On the obverse face is the image of Winged Victory. A symbol of Mexico’s independence, she is featured with a wreath crown held aloft in her right hand, and the broken chains of colonialism in her left hand.

The reverse face of the coin bears the coat of arms for Mexico. In the image, a Mexican bald eagle rests atop a cactus while it does battle with a serpent. The image was adopted during the conflict with Spain, and the modern version is featured in the center with 10 historic versions surrounding it.

The Mexican Mint was founded in 1535 by Spanish conquistadors looking to export gold and silver riches back to Europe. At one point in its history, the Mexican Mint produced the vast majority of circulation currency used in colonial empires throughout the Western Hemisphere.

If you have questions, please feel free to ask a Silver.com associate. Our team members are available at 888-989-7223, online using our live chat, and via email.