As its name suggests, the Blue Ridge Parkway is a roadway that runs for 469 miles through the Blue Ridge Mountains, connecting the states of North Carolina and Virginia. The roadways is known for its scenic beauty, and is considered the longest linear park in the country. The roadway was established in 1936 under one of President Franklin D. Roosevelt’s many public works projects.

America the Beautiful is a 56-coin series dedicated to the amazing monuments, parks, and forests of America. Each year the United States Mint produces five new coin designs representing parks, forests, and monuments as they were given federal status. The oldest parks were featured first, with new parks and forests represented in order of adoption.

The reverse side of each 2015 5 oz Blue Ridge Parkway ATB Silver Coin features the roadway itself as it snakes from one mountain tunnel out toward another. Engravings read “North Carolina,” “Blue Ridge Parkway,” and “E Pluribus Unum.”

On the obverse side of the coin is the image of President George Washington that so many are familiar with. Refined in 1932 by John Flanagan, the original source of inspiration was a 1786 bust from sculptor William Cousins. This is the same image found on standard American quarters.

Each of these coins is produced by the United States Mint. The Philadelphia and Denver mint facilities share the responsibility for production, with the San Francisco Mint contributing to the striking of special edition coins in the series.

We encourage all Silver.com shoppers to ask questions when they arise. You can reach us at 888-989-7223, connect with us online via our live web chat, or send us an email. If you are interested in similar products, be sure to check out our full selection of America the Beautiful Coins. 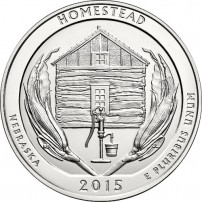