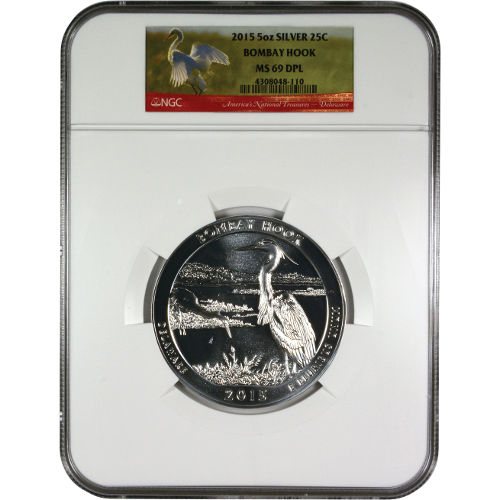 Bombay Hook National Wildlife Refuge is one of the most important plots of federal land on the East Coast of the United States. Here, on roughly 15,000 square acres of land, migratory birds traveling up and down the eastern seaboard stop to rest, breed, and feed. Today, 2015 5 oz Silver ATB Bombay Hook coins are available online for purchase courtesy of Silver.com.

All of the 2015 5 oz Silver ATB Bombay Hook Coins available today on Silver.com have Mint State 69 grades from the NGC. These coins each exhibit full, original mint luster, but also feature a maximum of two minor detracting flaws on the surface.

Coins with a DPL designation are known as deeply-mirrored, proof-like specimens. Although these are bullion products, you’ll notice finishing features similar to that of a proof coin. The background fields are mirrored, giving a proof-like appearance.

These coins are the fourth release in the America the Beautiful coin series, which debuted in 2010 from the United States Mint. The concept for the coins originated with the state quarters program. Those coins were released by the US Mint for circulation use in 1999, and represented only the 50 US states.

On the reverse side you’ll find the image of migratory birds stopping in the Bombay Hook National Wildlife Refuge. This is surrounded by engravings of the park’s name, state’s name, and the year of issue.

The obverse depicts the nation’s first president, George Washington, in left-profile relief. This is the same image found on the nation’s circulation quarters, and was refined in 1932 by John Flanagan based upon a 1786 portrait of Washington created by William Cousins.

Please feel free to contact Silver.com directly if you have any questions about these coins. We’re available at 888-989-7223, online using our web chat feature, or via our email address. If you are interest in similar products, be sure to check out our entire selection of Certified America the Beautiful Coins.