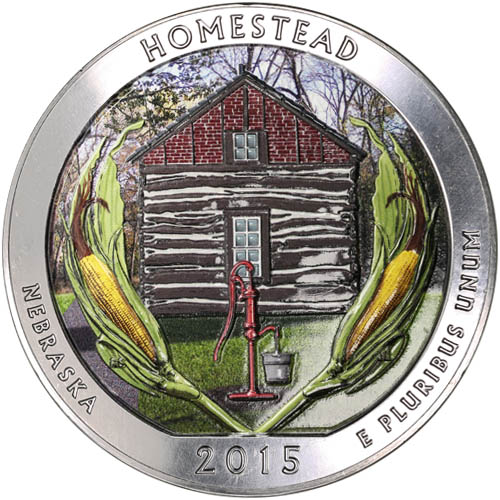 The first coin released in the 2015 ATB Silver Coin Series commemorated the Homestead Act of 1862, and the first parcel of land claimed under the act. Part of the larger America the Beautiful series, these coins are now available with a brilliant colorized finish on the reverse design. Right now, Silver.com offers the 2015 5 oz ATB Colorized Homestead Silver Coin for purchase.

When President Abraham Lincoln signed the Homestead Act of 1862 into law, he paved the way for Union sympathizers to spread west from the East Coast of the United States. Under the act, citizens of the US and permanent residents were permitted to claim up to 160 acres of land in the American West, in exchange for five years of work on that land, cultivation, and improvement of the property.

In total, the US government gave away 270 million acres of federal land to citizens of the US, and the first acres claimed under the Homestead Act were located four miles west of Beatrice in Gage County, Nebraska.

On the reverse side of each 2015 5 oz ATB Colorized Homestead Silver Coin is the image of all the things required for success in frontier life; a home, wheat for food, and water wells to quench your thirst. These coins feature brilliant colorizations that bring the image to life. Engravings include the state of issue, name of the park, “E Pluribus Unum,” and the year of minting.

The obverse features a left-profile portrait of President George Washington. His image, common on American 25-cent pieces since 1932, is surrounded by the engravings “United States of America,” “Liberty,” “In God We Trust,” and the coin’s face value.

Originally produced at the United States Mint’s Philadelphia and Denver Mint facilities, these coins were given a colorized finish on the reverse design set in Germany. The Emporium Hamburg completed the colorization of the coins, and resells them to consumers.

If you have questions, don’t hesitate to ask. A Silver.com associate is available on the phone at 888-989-7223, online using our live web chat, or via email. Are you looking for similar products? Be sure to check out our Silver Dollars page.