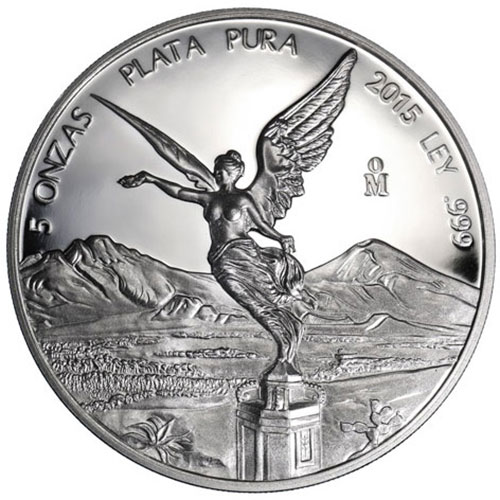 Any quantity available for $19.99 per oz over spot!

Among the most in-demand coins in the market today are those with higher weights. It isn’t the weight and value of the larger-weight coins that makes them popular as much as it is the rarity of those coins. The Mexican Mint produces less than 1,000 of its larger weight Silver Mexican Libertads on an annual basis. Right now, Silver.com has the 2015 5 oz Proof Silver Mexican Libertad coin.

Libertad coins are available on an annual basis from the Mexican Mint and are considered the official sovereign coins of the nation. The Silver Mexican Libertad is the official silver product of the nation, and is available in bullion, proof, and proof-like versions with eight total weights. The coin is also available in gold and platinum, with the gold consisting of bullion and proof. Platinum coins were struck only in proof in 1989.

On the obverse side of all Proof Silver Mexican Libertad coins is the image of Winged Victory. Her likeness is an exact replica of a statue that sits in the center of Mexico City. It was erected there in 1920 in honor of 100 years of Mexican independence from Spain.

The reverse of the 2015 5 oz Proof Silver Mexican Libertad bears the coat of arms for Mexico. In the center of the design, the modern coat of arms includes the phrase “Estados Unidos Mexicanos” and a wreath along the bottom. Around the outer rim are 10 historic versions of the emblem used by the Mexican government over time.

The Mexican Mint is the oldest operating facility in the Western Hemishpere. Founded in 1535 by Spanish conquistadors, the mint is now the sovereign facility of Mexico’s federal government, printing currency and paper bank notes with authorization from Banco de Mexico.

If you have questions, please contact Silver.com at 888-989-7223, chat with us online using our website’s live chat feature, or send us an email. If you are interested in similar products, be sure to check out our full selection of Mexican Mint products.