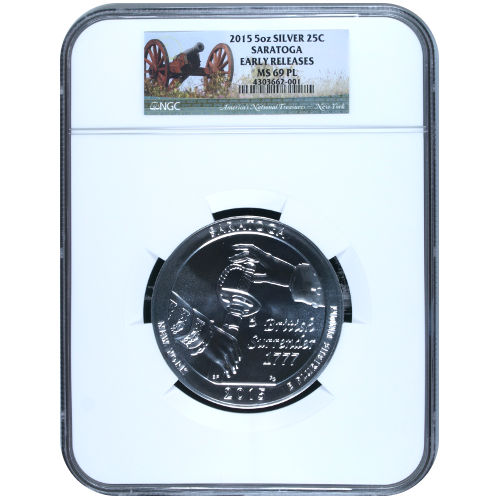 The America the Beautiful bullion series from the United States Mint has proven incredibly popular among numismatists in North America. Struck with .999 fine silver and featuring new images for each of the five annual releases, the series is a hit with those who enjoy collecting precious metal coins. Right now, the 2015 5 oz Saratoga ATB Silver Coin is available on Silver.com in near-perfect condition.

Each 2015 Saratoga ATB Silver Coin in this listing has a near-perfect grade from the NGC. Coins with an MS69 grade have their full, original luster from the mint, but also feature a maximum of two minor detracting flaws. The PL designation indicates these bullion products have a proof-like finish, giving them enhanced visual brilliance compared to a standard bullion coin.

America the Beautiful is a 56-coin series from the US Mint that celebrates the national monuments, parks, and forests of the 50 US states and the nation’s five overseas territories, as well as the federal capital of Washington DC.

Saratoga National Historical Park is located in the state of New York and was the site of the first major American victory of the Revolutionary War. General Horatio Gates and the Continental Army defeated General John Burgoyne and the British Army, handing the British their first major defeat of the conflict and convincing the French to lend aid to the American cause.

On the reverse side of the coin is the image of a sword being handed over as a sign of surrender. The obverse side of the coin features the left-profile portrait of President George Washington, the nation’s first elected president and leader of the Continental Army. This particular design is found on all American quarters and was created in 1932.

If you have any questions, Silver.com associates are standing by to help. You can reach us on the phone at 888-989-7223, connect with us online using our live chat, or submit your questions via email.