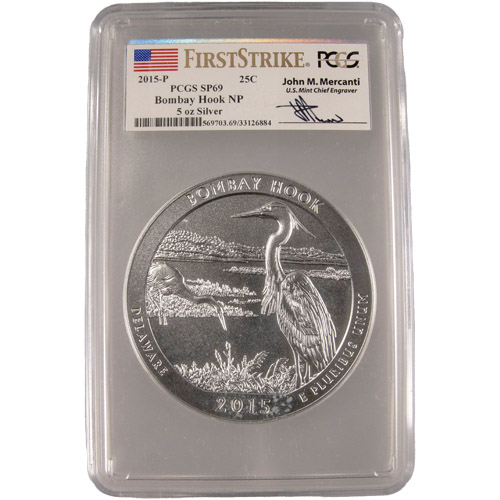 Established as a national site in 1937, the Bombay Hook National Wildlife Refuge is one of the many landmarks celebrated by the U.S. Mint’s America the Beautiful Quarters series since it began in 2010. Now available from Silver.com, the 2015 5 oz Silver ATB Bombay Hook Coin was the fourth in the series to be issued that year and the 20th overall to be struck as part of the program.

The detailed design of the 2015 Silver ATB Bombay Hook Coin is the work of award-winning medallic artist Phebe Hemphill, and it’s available in near-perfect condition with original-mint luster and no more than two detracting flaws. A First Strike coin that was received for grading within 30 days from its initial release, it ships from Silver.com in an individual protective plastic slab and makes a perfect gift for numismatists and wildlife enthusiasts, collectors, and investors alike. We fully insure shipments against any possibility of loss or damage.

The Bombay Hook National Wildlife Refuge’s representatives participated in choosing the design for this coin, part of a series of commemorative coins showcasing great American landmarks. The sixteen thousand acres of Bombay Hook form one of the most important wetlands environments on the American continent, providing food and shelter for countless thousands of migrating birds every year.

On the reverse, the coin carries an image of that landscape that features a great blue heron in the foreground and an egret in the background. Around the edge, it bears the inscriptions “BOMBAY HOOK,” “DELAWARE,” “2015,” and “E PLURIBUS UNUM.”

The obverse side features a profile portrait of George Washington, the same image seen on circulation quarters for the last eight decades. It carries the inscriptions “UNITED STATES OF AMERICA,” “LIBERTY,” “IN GOD WE TRUST,” and “QUARTER DOLLAR.”

You can contact Silver.com with any questions when buying silver through our customer service line at 888-989-7223. Alternatively, you can connect with our live online chat or e-mail us with your inquiries.