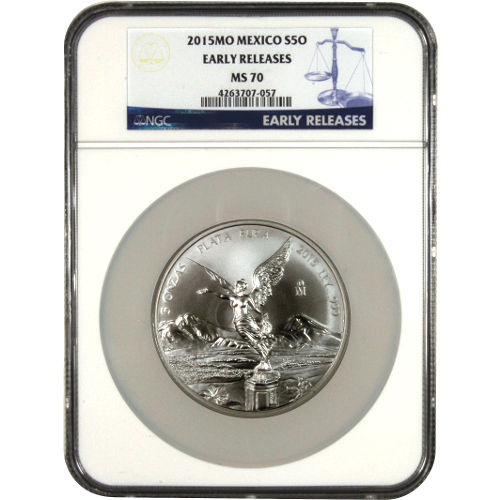 When Mexico started the celebration of the centennial of its War of Independence in 1920, the nation turned to numerous inspiration symbols for use on its gold Centenario coin. Struck by the Mexican Mint for several decades, those images reappeared in 1982 on the Silver Mexican Libertad coin.

The obverse side of each coin bears the central image of Winged Victory, a symbol of Mexican victory in the war. A statue matching winged victory stands in the center of Mexico City today. Behind her on the obverse is the image of two volcanic peaks, named after a pair of lovers from an ancient Aztec tale.

On the reverse side of the coin is the coat of arms of Mexico. The modern-day version is featured in the center, immediately surrounded by a wreath and the engraving “Estados Unidos Mexicanos.” There are also 10 historic versions of the coat of arms included around the outside of the central image.

Each coin in this product listing has a perfect MS70 grade from the NGC, meaning that each has its full, original luster and no blemishes of any kind. Part of the Early Release Series, these coins were received by the NGC during the first 30 days of the 2015 production cycle.

If you have questions about these coins, a Silver.com associate will be happy to answer them. You can contact us at 888-989-7223, chat with us online, or send us an email. If you are interested in similar coins, please check out our full selection of Mexican Silver Libertads.