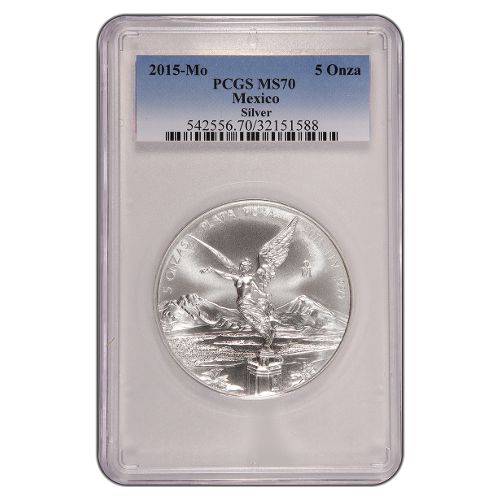 Mexico’s official silver bullion coin might lack the visibility and mintage numbers of other popular sovereign coins, but investors and collectors across North America are starting to stand up and take notice. The Silver Mexican Libertad is a brilliantly designed coin with high purity levels. Now, the 2015 5 oz Silver Mexican Libertad Coin is available in perfect condition through Silver.com.

The Mexican Mint first introduced the Silver Mexican Libertad in 1982 with design features inspired by the gold Centenario coin. That original coin was produced from the 1920s to the early 1950s by the Mexican Mint, and featured iconic images from the centennial celebration of the nation’s War of Independence with Spain.

On the obverse side of each 2015 5 oz Silver Mexican Libertad is the image of the angel of independence. Known as Winged Victory, a statue of her likeness was erected in Mexico City’s central square in 1920 to commemorate 100 years since the start of the nation’s struggle for freedom.

The reverse side bears the coat of arms for Mexico in the center. In the image, a bald eagle does battle with a serpent as it sits perched atop a cactus. A wreath encircles the bottom of the seal, while the words “Estados Unidos Mexicanos” are engraved above. Surrounding the modern seal are 10 historic versions used by the government since the 1820s.

Each of these coins was produced by the Mexican Mint, and bears a Mint State 70 grade from the PCGS. Coins in this condition are considered perfect, with their full, original luster, and no detracting flaws, contact marks, blemishes, or hairlines present on the coin.

The Mexican Mint was founded in 1535 by Spanish conquistadors looking to refine and export the region’s vast gold resources. Today, it remains as the oldest operating mint in North America.

If you have any questions, a Silver.com associate is waiting to help out. You can reach us at 888-989-7223, online via our web chat, or by sending us an email. If you are interested in similar products, be sure to check out our collection of Silver Mexican Libertads.