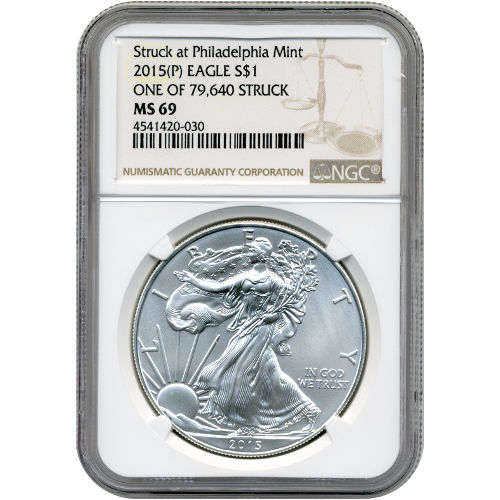 The skyrocketing demand for Silver American Eagle coinage in recent years has pushed the United States Mint’s West Point Mint facility to its capacity. With West Point already responsible for all Gold and Silver Eagle mintage across the bullion, proof, and burnished lineup, other mint locations have stepped up supplementary striking of bullion Silver Eagles to meet demand. Today, the 2015 (P) 1 oz Silver American Eagle is available to you online at Silver.com with NGC certification!

In order to meet the intense demand for Silver American Eagle bullion coins, the United States Mint has pressed previous minting locations back into service with supplementary striking of the Silver Eagle. The 2015 Silver American Eagles coins in this listing are certified by the NGC to have originated at the Philadelphia Mint.

As these coins are bullion Silver Eagles, there is no “P” mint mark and each one is produced in line with Silver American Eagle coining, which means there is no visible difference between these coins and others in the Silver Eagle bullion collection. However, that does not detract from the rarity of silver bullion Eagles from the Philadelphia Mint.

Each 2015 1 oz Silver American Eagle coin listed here is considered near-perfect by the NGC. A Mint State 69 coin has full, original mint luster and a maximum of two minor flaws. Those flaws are limited to minuscule hairlines or contact marks, and found only outside the primary focal areas of the coin.

Please don’t hesitate to contact Silver.com with questions. You can reach us on the phone at 888-989-7223, or connect with us online using our live chat and email features.