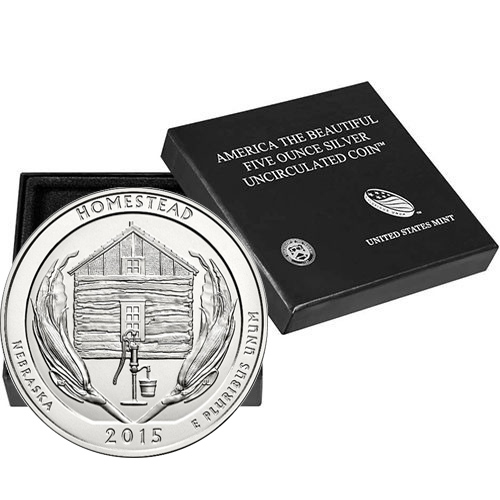 One of the most significant homestead acts passed by the federal government during the 19th century was the Homestead Act of 1862. Signed into law by President Abraham Lincoln, the act opened up millions of acres of government-owned land and public domain for applicants to take ownership of for free so long as the land was occupied and altered by the owners. Today, 2015-P 5 oz Burnished Silver ATB Homestead Coins are available to you at Silver.com.

All 2015-P 5 oz Burnished Silver ATB Homestead Coins in this listing at Silver.com are shipped inside of their original US Mint boxes. The coins also include a Certificate of Authenticity and feature lower mintage figures than the bullion versions, making them a more ideal option for collectors.

On the obverse of 2015 Burnished Silver ATB Coins, you’ll find the image of President George Washington. In 1932, the federal government moved to place Washington’s effigy on the circulation quarter to mark the 200th anniversary of his birth. John Flanagan created the portrait based on a 1786 sculpting of Washington and it still features on the quarter today.

The reverse of 2015-P 5 oz Burnished Silver ATB Homestead Coins includes three important images vital to life on the frontier. Shelter, food, and water were critical, and this design includes a log cabin in the center that is flanked by two ears of corn and a water pump. It is estimated that the homestead acts passed during the 19th century gave away 270 million acres of public land (10% of the total US land area) to more than 1.6 million homesteaders.

Please feel free to reach out to Silver.com if you have any questions. You can contact our customer service team at 888-989-7223, chat with us live online, or simply send us an email with your inquiries.