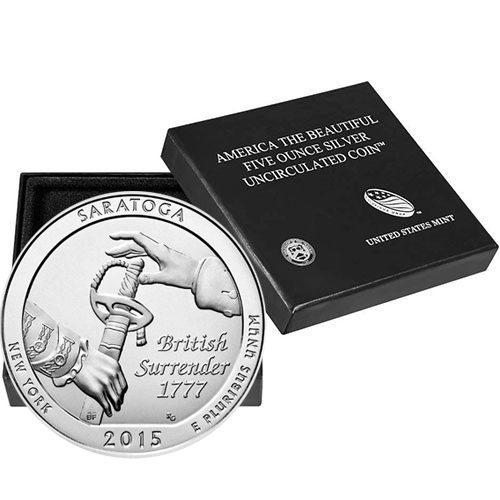 American victory at the Battle of Saratoga was the climax of the Saratoga campaign and achieved a variety of goals for the American cause of independence. The significant battlefield victory gave Americans a boost in morale, but it also boosted support from foreign governments to the cause of a fledgling nation. Right now, 2015-P 5 oz Burnished Silver ATB Saratoga Coins are available to purchase online at Silver.com.

Each of the 2015-P 5 oz Burnished Silver ATB Saratoga Coins available here comes with its original US Mint box and an included Certificate of Authenticity. While the bullion coins in the ATB Series are produced by the West Point Mint with no mint marks, the Burnished Silver ATB Coins are produced by the Philadelphia Mint and come with a “P” mint mark.

Early in the Revolutionary War, the British Army took control of New York City and its harbors. The plan of leading British General, John Burgoyne, was to move out from a base of power in New York City to cut the American colonies in half and separate the southern colonies from the northern ones. General Burgoyne marched an army down from Canada hoping to meet with another leaving New York City.

The planned movements to cut off New England from the southern colonies failed when Burgoyne and his forces became surrounded near Stillwater, New York in September 1777 by two American armies. The American forces under the guidance of General Horatio Gates twice beat back the British attempts to escape and forced a surrender on October 7, 1777.

The moment of that surrender is artistically captured on the reverse of 2015-P 5 oz Burnished Silver ATB Saratoga Coins. Here, you’ll find a close up of General John Burgoyne’s hand as he extends his sword in defeat to General Horatio Gates, whose hand you can see reaching to accept the sword.

On the obverse of all 2015 Burnished Silver ATB Coins is the image of another famous American of this era, George Washington. The former Commander in Chief of the Continental Army went on to serve two terms as the nation’s first elected president.