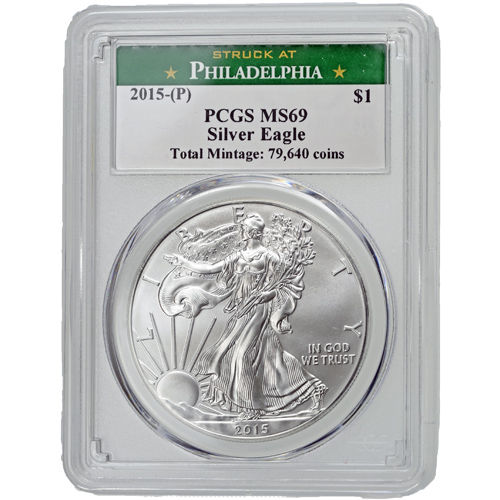 All of the 2015 Silver American Eagle coins in this product listing are standard silver bullion versions of the coin. They do not feature a “P” mint mark of the Philadelphia Mint, but are guaranteed to have been struck there as part of the United States Mint’s supplementary striking process.

Facing unprecedented demand for the Silver Eagle since 2008, the US Mint has pressed the San Francisco Mint and Philadelphia Mint back into service producing Silver American Eagle bullion coins. The San Francisco Mint was the original minting location for the coins in 1986, and has been contributing to production again since 2011.

All 2015 1 oz Silver American Eagle coins listed here are considered near-perfect coins by the PCGS. A Mint State 69 coin has full, original mint luster and a maximum of two minor flaws. Those flaws are limited to miniscule hairlines or contact marks, and found only outside the primary focal areas of the coin.

On the obverse of all Silver American Eagle coins is Adolph A. Weinman’s Walking Liberty design. Created in 1916, it appeared on the Walking Liberty Half Dollar until 1947 and is considered one of the nation’s greatest coinage designs ever.

The reverse of the 2015 1 oz Silver American Eagle coin includes the Heraldic Eagle of the United States. Developed in 1794 on original coinage from the Philadelphia Mint, it has been updated numerous times in American history and features on this coin as a modern design from John Mercanti, then-US Mint Chief Engraver.

Please don’t hesitate to contact Silver.com at 888-989-7223. You can also connect with us online through our live web chat and email features.