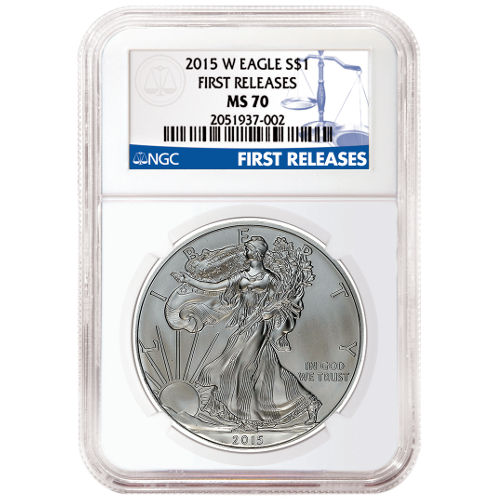 The Silver American Eagle is the single most popular silver bullion coin in the world today. First produced in 1986, the coin series has been produced in every year since that date in bullion, with just one disruption in the annual production of the proof version, which occurred in 2009 during the Great Recession. Right now you have the chance to own a special 2015 Silver American Eagle First Release coin with a Blue Label from the NGC, courtesy of Silver.com.

Each 2015 Silver American Eagle coin in this Silver.com product listing is considered a perfect specimen by the NGC. Coins with an MS70 grade have full, original mint luster and no detracting flaws or blemishes of any kind.

The First Release designation is reserved for coins that are received directly by the NGC or an NGC-approved depository within 30 days of the release date from the US Mint. In order to qualify, the coins must arrive within the time period described above, otherwise they are not eligible for this designation and will not include the special Blue Label denoting their status.

NGC Graded Silver American Eagle coins are part of the American Eagle series from the US Mint. The American Eagle is available in gold, with four different weights and three versions (bullion, proof, and burnished), as well as platinum. The Silver Eagle is the most popular coin in the series, and the 2015 production year saw a second-straight record-breaking production year, with 47 million specimens struck and sold.

On the obverse is Walking Liberty, one of the nation’s most iconic coin designs that originated on the Walking Liberty Half Dollar from Adolph A. Weinman. Former US Mint Chief Engraver John Mercanti designed the heraldic eagle on the reverse.

If you have questions, don’t hesitate to ask a Silver.com associate. You can reach us at 888-989-7223, connect with us online using live chat, or send us an email.