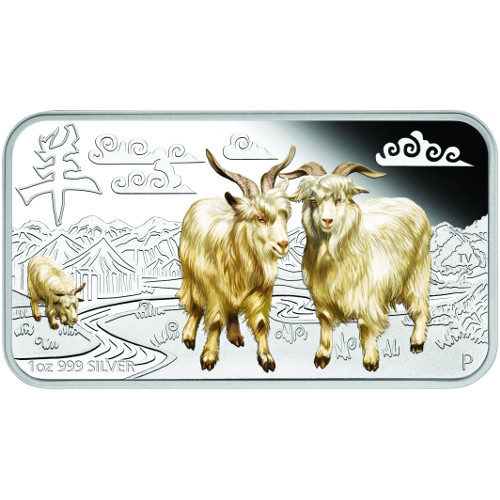 The Perth Mint is well-known for producing some of the most interesting proof and bullion coins in the world. Among the most coveted options from Perth Mint are its limited issue sets and colorized coins. Today, the 2015 Colorized Silver Australian Goat Rectangle 4-Coin Set is available online at Silver.com.

Each 2015 Colorized Silver Australian Goat Rectangle 4-Coin Set contains four individual coins with 1 oz of silver and a rectangular shape. On the reverse side of each of these unique coins is a different Year of the Goat design. The goats featured in each design have different colorizations with a beautiful background for each.

On one coin is the image of a family of three goats, each with white wool. Another coin features two black goats, one grazing while the other rests, along the edge of a river. Two goats are featured on the third coin with thick wool coats and long, twisted horns on their head. The final coin features three mountain goats poised at the edge of a cliff along a ridgeline.

Your 2015 Colorized Silver Australian Goat Rectangle 4-Coin Set arrives in a panoramic display box that allows you to see all four coins’ reverse designs at the same time. A numbered Certificate of Authenticity is included with your unique set.

On the reverse of each coin in this collection you’ll find one of the unique, colorized design sets mentioned above. Only the weight, purity, and metal content of each coin is included, along with an engraving of the Perth Mint’s “P” mint mark.

The obverse of all coins in this collection have Raphael Maklouf’s portrait of Queen Elizabeth II. Her Majesty’s right-profile depiction is featured on the obverse of all British and commonwealth coinage, but this unique effigy features the Queen with a larger crown and a necklace around her neck.

Founded in 1899, the Perth Mint was initially the third and final facility in the Royal Mint system on the continent. Following Australian federation, the Sydney Mint and Melbourne Mint eventually moved toward closure, leaving the Perth Mint as the oldest in the country. The Royal Australian Mint is now the sovereign mint of the nation, with the Perth Mint owned by the state of Western Australia.

Please don’t hesitate to reach out to Silver.com with questions. You can reach our customer service team at 888-989-7223, connect with us online using our live chat, or send us an email.