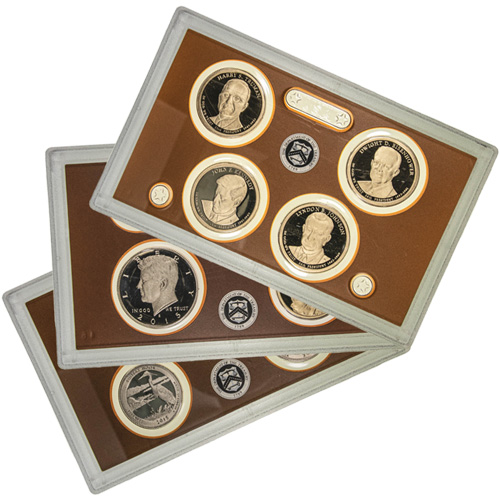 The United States Mint releases a new set of proof circulation coins each year that draws the attention of collectors. These sets are created to showcase the unique coinage of the US. Right now, you can purchase 2015 Proof US Mint sets from Silver.com in good condition.

This set features 14 coins that all have mirrorlike proof finishes, setting them apart from the regular circulation versions of the coins. Each of the coins in this set were minted in 2015 by the United States Mint. Since these are government-issued coins, they all have a face value.

In this set, you will receive a Lincoln cent, Jefferson nickel, Roosevelt dime, Kennedy half dollar, and a Native American dollar, as well as a number of coins from prominent US Mint coin series.

These sets ship in special plastic holders that hold each group of coins in this set. The original sets came with a Certificate of Authenticity and a shipping sleeve. Since these are used sets, keep in mind that the packaging may not be in perfect condition. Some components of the packaging may even be missing. All of the coins will be in good condition.

Should you need any assistance placing your order at Silver.com, please contact our customer service department via live chat, email, or phone at 1-888-989-7223. We are happy to answer any questions you may have about these coin sets or any other products on our website.