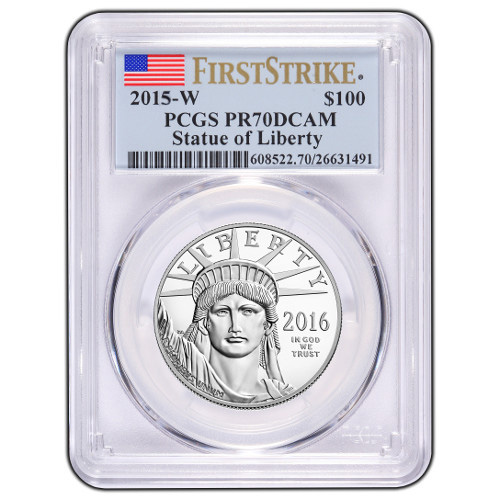 The American Eagle Series from the United States Mint is arguably the single most popular program from the mint. Each year the mint releases these brilliant coins in bullion and proof versions across three different precious metals: gold, silver, and platinum. The 2015-W 1 oz Proof Platinum American Eagle Coin is available online now at Silver.com with perfect certification from the PCGS!

Proof American Platinum Eagle coins are unique from the US Mint in that they are the only specimens from the mint to feature a new reverse design each year. The 2015 reverse design is known as Liberty Nurturing Freedom. As of 2015, the US Mint has used the Torches of Liberty designs from United States Mint Artistic Infusion Program designer Paul C. Balan and US Mint Engraver-Sculptor Joseph Menna. The Proof Platinum American Eagle coins in this design series concluded with the Torch of Enlightenment design the next year in 2016.

Each 2015-W 1 oz Proof Platinum American Eagle coin in this Silver.com listing features a PR70 grade from the PCGS. Considered perfect specimens, the coins have full, original mint luster and no detracting flaws.

As Deep-cameo coins, these products have a brilliant contrast between the strong, frosted finish of the design sets and the deeply-mirrored, clear background fields. Early Release coins must arrive at the PCGS or third-party, approved depositories within the first 30 days of the 2015 release date the US Mint set for Platinum American Eagle.

We encourage all Silver.com customers to reach out to us with questions. Our customer service department is available at 888-989-7223, or you can connect with us online through our live web chat and email features.