After 29 years of production, demand for the Silver American Eagle remains high. The coin program was introduced in 1986, and while demand has ebbed and flowed over the years, the bullion and proof coins remain the most popular in the world. Today, you can purchase this 2015-W 1 oz Proof Silver American Eagle NGC PF70 UCAM from Silver.com.

The Liberty Coin Act was passed by Congress in 1985, authorizing the release of silver stores from the Defense National Stockpile to be used in the creation of an official silver bullion coin of the United States. The program requires all silver used in production of these coins to be sourced from within the US.

When the NGC issues a perfect grade to a proof coin, it adds inherent value to the product. These proof coins have their full, original luster, and feature no blemishes, hairlines, or contact marks. The UCAM designation describes the coin’s finish. A strong, frosted design appears to float over a clear, deeply mirrored background field.

Some of the most iconic images from American history are featured on the Silver American Eagle. Lady Liberty, as designed by Adolph A. Weinman, graces the obverse side of the coin. As she walks toward the setting sun, her right hand is outstretched and the American flag covers her shoulders.

The reverse image was designed by US Mint chief engraver John Mercanti. Created specifically for the Silver American Eagle, it features a bald eagle with the engraving of 13 stars over its head to represent America’s original colonies.

We encourage you to direct your questions to a Silver.com associate at 888-989-7223, online using our live chat service, or via email. 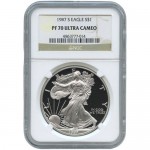 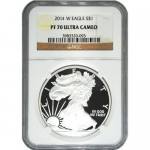