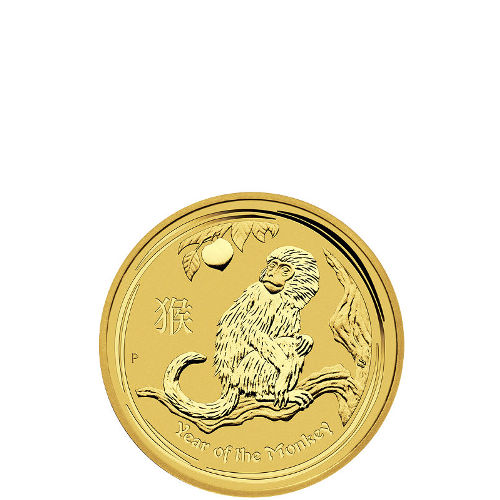 Australia’s Lunar Series II coin program is one of the most successful in the world. Building upon the success of its predecessor, the Lunar Series I program, the latest coins inspired by the Chinese Lunar Calendar have been met with immense demand from investors and collectors alike from around the globe. Silver.com now offers the 2016 1/10 oz Gold Australian Monkey Coin in BU condition for investors.

Lunar Series coins originated at the Perth Mint in 1996. The coins were so popular that the mint introduced a Lunar Series II program in 2008 that featured brand-new reverse designs for each of the animals in the 12-year cycle.

On the reverse side of the 2016 1/10 oz Gold Australian Monkey is the unique design of a monkey from Ing Ing Jong. The artist responsible for both the silver and gold coin designs in this series, her Gold Australian Monkey design focuses on a single adult monkey sitting in a tree as it looks at a peach hanging from the branch above.

The obverse bears the right-profile portrait of Queen Elizabeth II. Designed in 1998 by Ian Rank-Broadley, Her Majesty’s effigy is surrounded by the face value of the coin, her name, the nation of issue, and the year of issue.

Perth Mint is the oldest operating facility in Australia. The mint was founded just four years before the nation’s Articles of Federation were filed, and the mint remained in British control until 1970.

If you have questions about these Lunar Series II coins from the Perth Mint, please reach out to Silver.com. Our associates are available at 888-989-7223, online using our live web chat, or be submitting your questions and concerns via email.