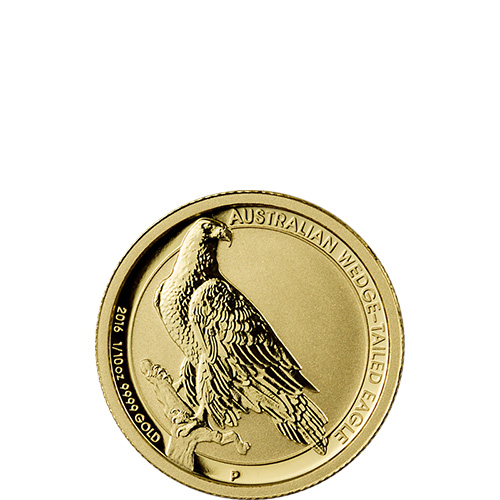 John Mercanti joined forces with the Perth Mint in 2014 to create the designs for the Wedge Tail Eagle coin series. Mercanti worked for the United States Mint from the 1970s until 2010. He worked his way up from being an engraver and artist at the Philadelphia Mint to serving as the 12th Chief Engraver of the United States Mint from 2006 until his retirement in 2010. Through 2019, he has created a total of four designs in the Wedge Tail Eagle series.

All 2016 1/10 oz Gold Australian Wedge Tail Eagle Coins in this product listing come to you in their original Brilliant Uncirculated condition. Coins are housed inside of protective packaging and the 2016 date mark on gold coins in the collection represent the debut date mark in the gold series.

On the reverse side of 2016 1/10 oz Gold Australian Wedge Tail Eagle coins, you’ll find the vision of a wedge tail eagle at rest on his perch, though vigilant of his surroundings. The bird stands tall with its head looking around as its wings rest at its side. Although this is the third year for the overall Wedge Tail Eagle Series, this is just the second design in the collection as the 2014 and 2015 silver coins used the same design.

The obverse face of the 2016 Gold Australian Wedge Tail Eagle Coins comes with the portrait of Queen Elizabeth II. Her Majesty is depicted here in right-profile relief in a design that represents the fourth-generation bust of the Queen from British coinage. It was created for the Royal Mint of England in 1998 by Ian Rank-Broadley.