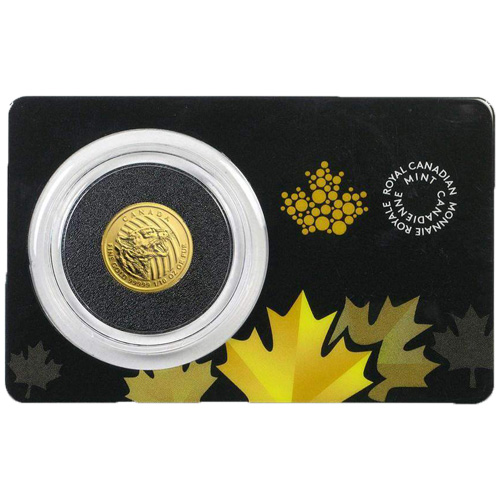 The Call of the Wild Series from the Royal Canadian Mint launched in 2015 and features some of the most fearsome predators and largest land mammals from North America. Design releases in this collection include the Grey Wolf, Grizzly Bear, and the Cougar. The cougar is one of the largest predatory cats in the Western Hemisphere. Right now, 2016 1/10 oz Gold Canadian Growling Cougar Coins are available to purchase online at Silver.com.

Each 2016 1/10 oz Gold Canadian Growling Cougar Coin in this product listing is individually packaged and offered to you in Brilliant Uncirculated condition. The coins in this series are all housed inside of credit card-sized protective packages that include an Assay card on the reverse with the purity, metal content, and weight of the coin, as well as an assayer’s signature.

The Call of the Wild Series is one of the Royal Canadian Mint’s most popular at the moment outside of the Canadian Maple Leaf coins. The Call of the Wild gold coins for sale feature designs on the reverse from Pierre LeDuc, a famed nature and wildlife artist whose works previously appeared in the Canadian Wildlife Series (2011-2013). Each coin also has brilliant .99999 fine gold content surpassing that of the Gold Maple Leaf.

On the obverse of 2016 1/10 oz Gold Canadian Growling Cougar Coins is the effigy of Queen Elizabeth II. Her Majesty features here in a right-profile portrait created in 2003 by Susanna Blunt, just the second Canadian to create a monarch’s portrait for Canadian coinage. Additionally, this is the first image of a British monarch on Canadian coins since King George VI to not feature a crown.

The reverse face of 2016 Gold Canadian Growling Cougar Coins features the silent killer known as a cougar. Also referred to as the puma or mountain lion, cougars are skilled stalkers who use ambush tactics to attack and kill their prey.

The Royal Canadian Mint was founded in 1908 and is one of the world’s most respected minting facilities. It operates its original Ottawa Mint as the center of bullion coin production, and handles the production of circulating currency at its Ottawa Mint facility opened in 1980.

If you have any questions, Silver.com customer service can help. You can reach us on the phone at 888-989-7223, chat with us live online, or simply send us an email with your inquiries.