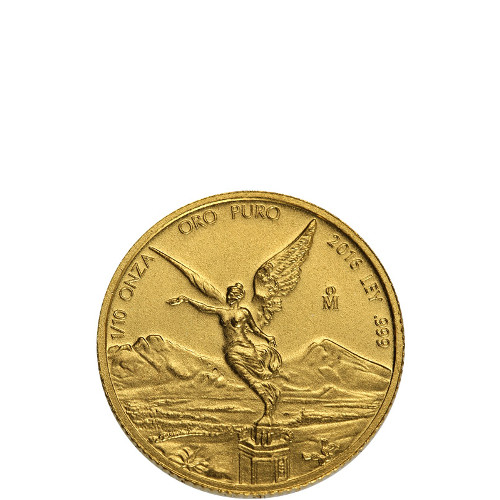 The Mexican Libertad Series of bullion and proof coins from the Mexican Mint are some of the hottest sellers in North America. Available since 1982, these popular coins are offered as silver and gold coins, with bullion and proof available in both. Right now, the 2016 1/10 oz Gold Mexican Libertad Coin is available to purchase online at Silver.com.

Each of the 2016 1/10 oz Gold Mexican Libertad Coins is available in BU condition. Coins in this condition have no signs of wear and tear, though you may notice a range of minor flaws that include breaks in the luster, spotted surfaces, or contact marks from the production process at the mint.

The original Gold Mexican Libertad coin released in 1981 had the same design features used on the Centenario coin by the Mexican Mint from 1921 to 1972. In 2000, the Mexican Mint modernized its images of the coat of arms and the statue of Winged Victory, with the most noticeable change being the rearrangement of Winged Victory’s standing. Rather than facing directly at the viewer, she was now visible more from a left-side angle.

Following their original introduction, the Gold Mexican Libertad was discontinued twice. The first time was from 1982 until 1991, when the coin was introduced again in a 1 oz. weight and four fractional weights. From 1995 to 1999 the coins were again discontinued, with a one-year production in 2000 followed by another halt in 2001.

On the obverse of the 2016 1/10 oz Gold Mexican Libertad coin is the image of the statue of Winged Victory, a representation of Mexico’s victory over Spain in the War of Independence. Her image reflects the nation’s success, with a wreath held aloft in her right hand and the broken chains of servitude in her left hand.

The reverse of the 2016 1/10 oz Gold Mexican Libertad includes the modern coat of arms for Mexico. The 11th depiction of the national seal, this features a bald eagle locked in battle with a serpent on the branch of a cactus, with an engraving of “Estados Unidos Mexicanos” around the top of the seal.

The Mexican Mint was founded in 1535 by Spanish conquistadors looking to export the wealth of Central America back to mainland Europe. Today it is the sovereign mint of the nation, controlled by the federal government, and overseen by the Banco de Mexico.

If you have questions, please contact Silver.com associates at 888-989-7223. Our associates are also available online using our live web chat feature and via email.