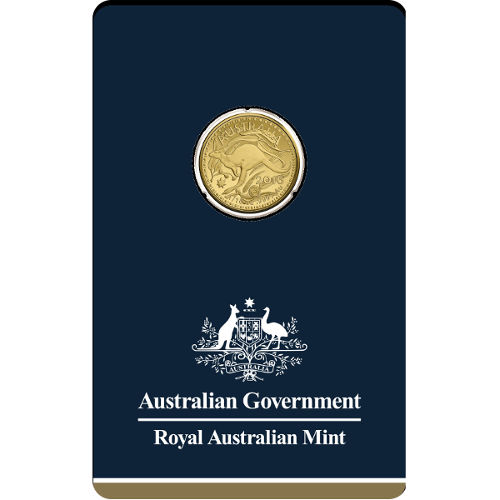 After 31 years out of circulation, the leaping kangaroo from the nation’s copper penny was revived by the Royal Australian Mint in 1993 for use on a silver bullion coin program. By in large, the mint changed the design features each year while maintaining a consistent theme of the kangaroo.

The original copper penny appeared for the first time in 1911 for the Commonwealth of Australia, but did not feature a kangaroo until the reign of King George VI. This design remained a popular reverse feature of the coins through 1964 when the mint discontinued the pennies ahead of decimalization of the nation’s currency in 1966.

You’ll find the kangaroo design on the reverse of these 2016 1/10 oz Gold Royal Australian Kangaroo coins. Featured in a leaping position with the star of the commonwealth, also featured on the original copper penny, this coin has added elements of the leaves of the Tasmanian Blue Gum surrounding the design.

On the obverse you’ll find the familiar right-profile portrait of Queen Elizabeth II. Created in 1998, this design is the fourth-generation depiction of Her Majesty and was created by Ian Rank-Broadley.

You can reach out to Silver.com with any questions about these coins. Our associates are available on the phone at 888-989-7223, online using our live web chat, and via our email address.