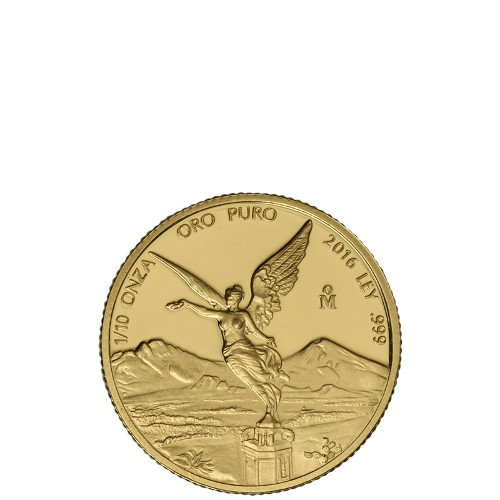 Mexico’s Gold Libertad coin is more than just the official gold coin of the nation, it is the successor the nation’s popular gold Centenario. Using design motifs inspired by the nation’s centennial celebration of its independence back in 1920, the Gold Mexican Libertad is a modern version of the Centenario that features refined design sets. Today, the 2016 1/10 oz Proof Gold Mexican Libertad is available online Silver.com.

The Gold Mexican Libertad is the modern bullion coin of the nation, and is produced annually in both bullion and proof versions. Even though this is a modern proof coin, it has roots that date back to 1920. During the centennial celebration of Mexico’s independence, the Mexican Mint released a coin known as the Centenario.

That commemorative coin had a face value of 50 Pesos, but was not intended for use as currency. It featured images representative of national history and Mexican pride. The angel of independence featured prominently on the obverse, along with the volcanic peaks of Popocatepetl and Iztaccihuatl, which were named after a pair of ancient Aztec lovers.

Since 2005, the Mexican Mint has produced the Proof Gold Mexican Libertad in a 1 oz variety and four fractional-weight coins. The 1/20 oz coin is the smallest in the series, and is produced in similar numbers to the 1/10 oz, ½ oz, and 1 oz coin each year.

On the obverse of the 2016 1/10 oz Proof Gold Mexican Libertad is a complex design with historical Mexican images. The statue of Winged Victory, a replica of the one in the center of Mexico City, dominates the center of the design field. The background includes the twin volcanic peaks of Popocatepetl and Iztaccihuatl.

The reverse of the 1/10 oz Proof Gold Mexican Libertad has the coat of arms for the nation of Mexico. Included in that coat of arms is the image of a bald eagle battling a serpent, with an engraving of “Estados Unidos Mexicanos,” or the United States of Mexico.

The sovereign mint of Mexico is the Mexican Mint. Founded in 1535, today it is controlled by the federal government of Mexico and it operations are overseen by Banco de Mexico, the official central bank of the country.

Please don’t hesitate to reach out to Silver.com with your questions. Our customer service team is available on the phone at 888-989-7223, on the web using our live chat, and by sending is an email.