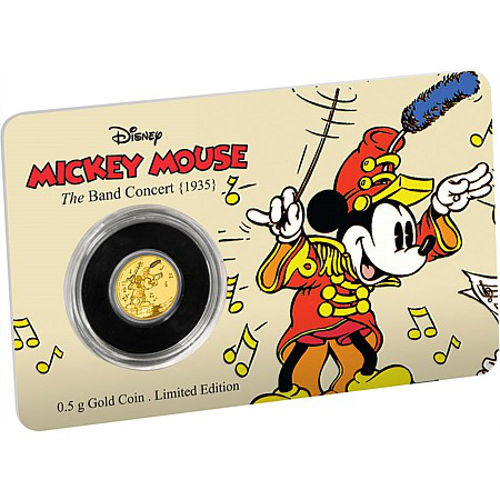 Millions of children around the world have grown up in the shadow of the most beloved Disney character: Mickey Mouse. The cute and cuddly rodent burst onto the scene in 1928 in the animated short entitled Steamboat Willy. Today, the Mikey Mouse image and associated content generates billions for Disney each year. The 2015 1/2 Gram Niue Gold Mickey Mouse The Band Concert Series Coin is available now on Silver.com.

More and more often investors are turning to uniquely-designed and foreign gold coins as a way to invest in gold as they are a great alternative to the more popular choices and can carry a higher buyback premium based on their rarity and the gold price per oz.

The New Zealand Mint regularly produces a variety of Disney-themed gold and silver coins. The Mickey Through the Ages program tracks the varying roles and appearance of Mickey Mouse from his introduction in 1928 until the 21st century.

On the obverse side of each coin you’ll find Ian Rank-Broadley’s classic 1998 right-profile portrait of Her Majesty Queen Elizabeth II. The Queen’s effigy is included along with engravings of her name, the nation of issue, face value of the coin, and the year of issue.

Flip the coin over and you’ll find the image of Mickey Mouse as the bandleader in The Band Concert. This side of the coin depicts Mickey as he conducts the band from a soapbox. Additional design touches include the use of musical notes floating around the surface design and sheet music thrown frustratingly on the floor.

New Zealand Mint is a privately-owned facility located in Auckland. The mint is the nation’s only minting operation, but it does not have an affiliation with the local government. All official currency for New Zealand is produced overseas at the Royal Canadian Mint and the Royal Mint in London.

If you have any questions, Silver.com associates are available to help. You can reach out to us on the phone at 888-989-7223, connect with us online using our live web chat, or send us an email with your inquiries.