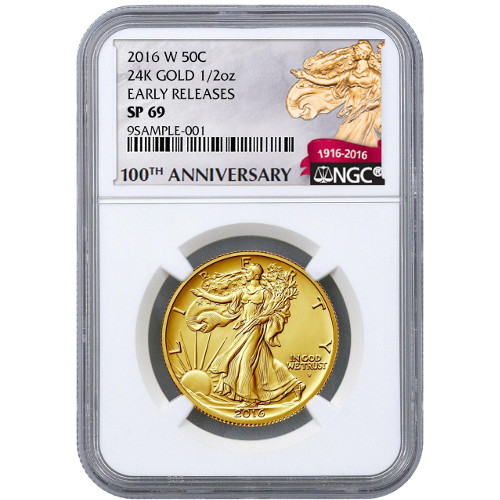 Gold American Centennial Coins are just the third offering of 24-karat gold coins in the history of the United States Mint. The special occasion marks the 100th anniversary of three iconic coin designs released in 1916.

Among those designs is the famous Walking Liberty design from Adolph A. Weinman. Already considered one of the finest American coin designs ever, Walking Liberty is currently the face of the Silver American Eagle coin series from the US Mint. Now, its 100th anniversary is celebrated on a one-half troy ounce coin with 24-karat gold and a commemorative face value of $.50 (USD).

Each 2016 ½ oz Gold American Walking Half Dollar Quarter coin in this listing earned a near-perfect SP69 grade from the NGC. Coins in this condition have a mirrored finish, full, original mint luster, and a maximum of two minor detracting flaws. As an Early Release specimen, these coins were received for grading by the NGC within the first 30 days of the US Mint’s established release date.

On the obverse of the coin you’ll find the iconic Walking Liberty design, which features a full-length depiction of Liberty with the American flag draped around her shoulders as she strides toward the setting sun.

The reverse of the 2016 ½ oz Gold American Walking Liberty Half Dollar Coin features Weinman’s American bald eagle design. This particular imagery depicts the bald eagle resting on its perch on a cliff side, with its wings spreading in preparation to take flight.

If you have questions, please feel free to reach out to Silver.com at 888-989-7223. You can also connect with us online using our live chat and email features.