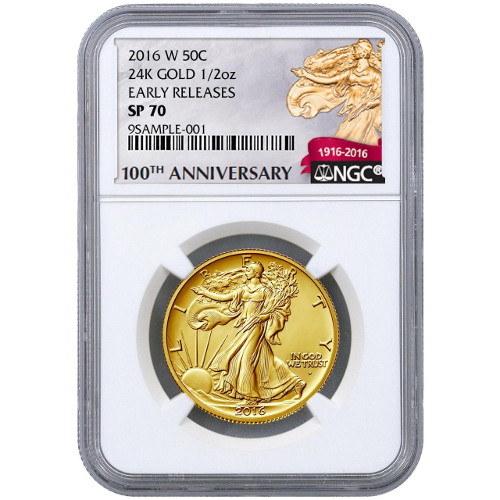 In 1916, the United States Mint released three new coin designs that would go down in history as some of the most popular to ever feature on American circulation currency. Arguably the most famous from that year was the Walking Liberty Half Dollar, created by Adolph A. Weinman. Today, the 2016 ½ oz Gold American Walking Liberty Half Dollar Coin is available on Silver.com as a perfect specimen.

Weinman actually had two coin designs win contests for use in circulation in 1916. He created an image known as Winged Liberty that was chosen as the face of the nation’s ten-cent piece, which went on to become known as the Mercury Dime. His Walking Liberty design was chosen for the half-dollar coin.

The Walking Liberty Half Dollar was in circulation from 1916 to 1947, at which point it was replaced by the short-lived Benjamin Franklin portrait on the half dollar starting in 1948. In 1986, the US Mint revived the Walking Liberty image for the Silver American Eagle. Now, Walking Liberty appears again on the commemorative half-dollar coin in the 2016 Gold American Centennial Series.

On the obverse of the 2016 ½ oz Gold American Walking Liberty Half Dollar Coin is the image of Walking Liberty, complete with the original engravings of “Liberty,” “In God We Trust,” and the year of issue. An additional engraving features the “AW” initials of Weinman.

The reverse of the coin bears the American bald eagle, which is featured resting on its perch on the side of a cliff. The bird’s wings are spread slightly in anticipation of taking flight. Engravings on this side include the original engravings from the half dollar and the addition of the coin’s metal content, purity, and weight.

Each 2016 ½ oz Gold American Walking Liberty Half Dollar in this Silver.com listing is an SP70 specimen according to the NGC. These coins exhibit full, original mint luster, a mirrored finish, and no detracting flaws. Early Release coins must arrive at the NGC within 30 days of the release date for the product to earn the ER designation.