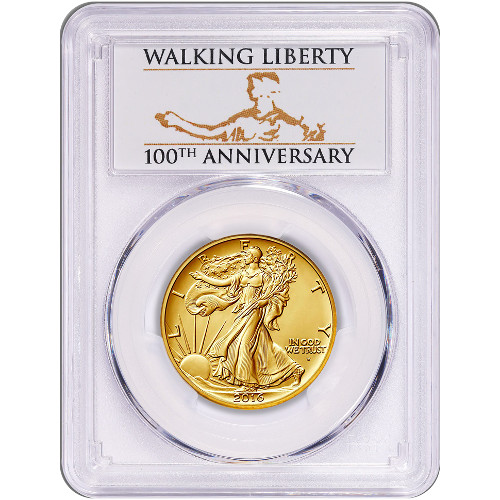 One of America’s greatest coin designs of all-time is back again, and this time it is featured in a commemorative series of 24-karat gold coins from the United States Mint. The mint is celebrating the 100th anniversary of three iconic designs, and the final release is available now. The 2016 ½ oz Gold American Walking Liberty Half Dollar Coin is available on Silver.com in near-perfect condition.

The 2016 Gold American Centennial Series is a three-coin release that offers three different weights, with each coin featuring 24-karat pure gold. These coins are just the third-ever release of .9999 fine gold coins from the United States Mint.

Each coin in the Gold Centennial Series has a weight and face value representative of the original coin it commemorates. The Mercury Dime coin features 1/10 troy ounce and a $.10 (USD) face value, while the Standing Liberty Quarter coin has ¼ troy ounce and a face value of $.25 (USD).

These 2016 ½ oz Gold American Walking Liberty Half Dollar Coins have one-half troy ounce of 24-karat gold and a face value of $.50 (USD). Each one earned an SP69 grade from the PCGS. Considered a near-perfect specimen, these coins have full, original mint luster and a maximum of two minor detracting flaws.

In order for these coins to earn the First Strike designation they needed to arrive at the PCGS for grading within the first 30 days of the release date set by the United States Mint.

If you have any questions, please don’t hesitate to ask. Silver.com associates are available at 888-989-7223, online using our live chat, and via email.